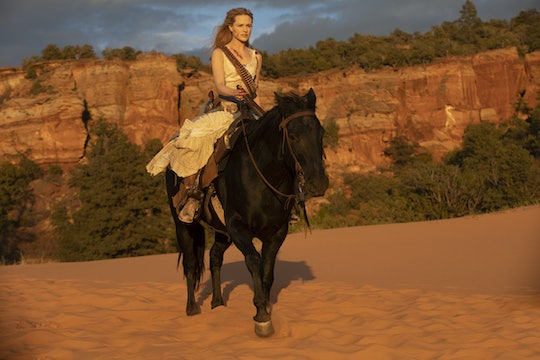 The Westworld Season 2 finale was a nonstop rollercoaster of revelations, zigzagging through the time and jumping from the real world to the virtual. The audience was left more than a little perplexed by many of the developments, but one specific twist was more mind-blowing than most. It was revealed that Dolores is Charlotte on Westworld — or maybe Charlotte is Dolores? It's a complicated one, so let's take a moment to talk it through so everyone is less confused.

Most of Season 2 has existed on two separate but distinct timelines (with a flashback here or there to spice things up): one storyline continued directly from the end of Season 1, while the other took place about two weeks later. In the two weeks later timeline, all the hosts were dead and a valley in the park was fully submerged in water. As each episode unfolded, Westworld began to fill in the gaps and marry one timeline to the other.

Charlotte and Dolores were key players in both, though they served totally different sides. Dolores was leading the robot rebellion, hoping to destroy the humans and find a way out of the park whereas Charlotte was loyal to the Delos corporation no matter the cost. Charlotte's ruthlessness ultimately cost her her life, while giving Dolores a second chance at her own.

Right before the flood, Dolores and Bernard traveled to the Forge. That's the huge server that stores the consciousness of the four million guests who have visited the park since its opening. Dolores wanted to destroy it, thus ruining the humans' plan to live eternally in host bodies one day. Then she would travel to the mainland, finally free to write her own story for the first time. But Bernard feared that if Dolores was let loose in the real world, she would kill every human she came across. To prevent that, he killed her.

However, that was a decision Bernard would come to regret almost immediately. He finally saw firsthand how cruel humans could be when he watched Charlotte murder Elsie in cold blood, to keep her from revealing the secrets she'd learned about the park and to stop her from getting in the way of Charlotte's plans. That was when he decided to pull the ultimate switcheroo: he would resurrect Dolores, but in a way that allowed her to infiltrate Delos undetected and finally find that freedom she sought. He built a host copy of Charlotte's body and placed Dolores' mind inside of it. Then Dolores killed Charlotte and took her place.

That means that the post-flood Charlotte has actually been Dolores the entire time. And while the audience was utterly caught off-guard (as was made clear by the reactions on Twitter), it does make a strange kind of sense. Charlotte has been acting strange ever since viewers caught up with her post-flood, and that's because she hasn't really been Charlotte at all. Dolores has been biding her time until she could get back into the Forge, where she had some unfinished business to take care of before exiting the park, perhaps for good.

Dolores stole several "pearls" (a.k.a. the hosts' minds and consciousness) and took a boat back to the mainland. Once there, she settled into Arnold's former home and began building hosts again. It looked like Dolores might have abandoned Charlotte's body to re-create her own in the final moments (or maybe she's just living in both?), but there wasn't enough time to figure it out when the episode ended. It's not clear whose pearls she took with her besides Bernard's or what her longterm plan is, but it leaves the show in an interesting place for Season 3. Dolores is free in the real world, and her next step is bound to be an exciting one.