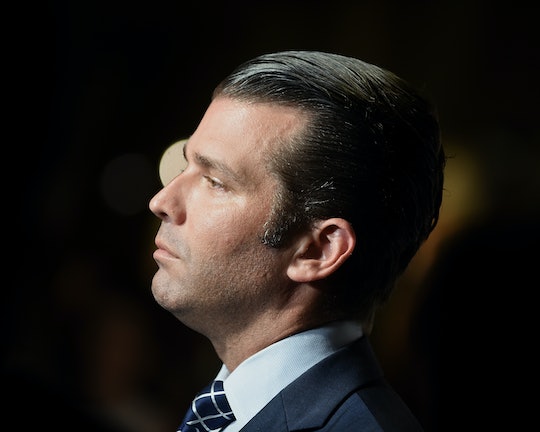 Don Jr. Says #MeToo Has Him Worried For His Sons. Me Too.

Last week the entire country watched as Dr. Christine Blasey Ford sat in front of the Senate Judiciary Committee and, under oath, accused D.C. Circuit Court Judge Brett Kavanaugh of attempted rape. In excruciating detail, Dr. Ford recalled what she alleges Kavanaugh did to her while drunk at a high school party, her voice wavering and her eyes filling up with tears. Donald Trump Jr. was also watching, and he says he's concerned by not only the Kavanaugh hearings but by the #MeToo movement in general. As a father, he is worried for his children. Not his daughters, though. No, Don Jr. is worried for his sons.

More Like This
If A Tick's Head Gets Stuck When You're Pulling It Out, Here's What To Do
30 Cheap & Easy Summer Activities For Kids
This Is Why Your Toddler Wants To Feed You All The Time
What Parents Should Know About The New CDC Mask Guidelines

In an interview with DailyMailTV, Trump Jr. said "I've got boys, and I've got girls. And I see what's going on right now, it's scary." But when asked who he is more scared for, his three sons or his two daughters, Trump replied, "Right now, I'd say my sons." He then went on to accuse Dr. Ford of lying, saying that what's going on right now "diminishes the real claims" of sexual assault and is fueled by politics.

And I, too, am extremely worried that the response to the #MeToo movement and Kavanaugh's appointment, the accusations against him, and the backlash the hearings into those allegations have caused, will negatively impact my son in the future.

I'm just not worried for the same reasons that, apparently, keep Don Jr. up at night.

I'm worried that my son will listen to Rep. Kevin Cramer (R-ND), who said of the sexual assault allegations against Kavanaugh: "Even if it's all true, does it disqualify him? It certainly means that he did something really bad 36 years ago, but does it disqualify him form the Supreme Court?"

I'm terrified my son will believe that what he does to another human being in high school doesn't matter; that he isn't responsible for his actions if time moves him forward without any repercussions, that his actions are free from consequence so long as they happened a certain number of years ago.

I'm afraid my son will become one of the one in 10 men who will be victims of sexual assault in their lifetime, and that, due to a toxic weave of hyper-masculinity and victim-blaming, no one but his father and I will believe him.

I'm afraid that despite my best efforts and constant teachings, my son will buy into the "boys will be boys" narrative, and truly believe his gender identity grants him the ramification-free ability to assault, demean, and dehumanize others.

I'm terrified that my son will one day believe that women are constantly falsely accusing men of sexual assault, when the exact opposite is true. A White House lawyer told Politico that Kavanuagh's Supreme Court nomination would not be withdrawn, because "if someone can be brought down by accusations like this, the you, me, every man certainly should be worried. We can all be accused of something."

But only 2 percent of all rape and sexual assault allegations are found to be false, (the same percentage as all other felonies in the United States). Yet people claim false allegations in the case of sexual assault more than they do for any other felony crime. In other words, according to Stanford's Men Against Abuse Now organization, "we are much more likely to disbelieve a woman if she says she was raped than if she says she was robbed, but for no good reason."

I'm worried that my son will assume being a man is synonymous with being an abuser; that he'll believe somewhere, buried deep inside his DNA, is a genetic code that makes sexual assault an inevitability. Fox News columnist Stephen Miller called the heinous allegations levied against Kavanaugh nothing more than "drunk teenagers playing seven minutes of heaven," and professor and author Tom Nichols tweeted, "Man, I hope all the people who are making this case had spotless lives at 17, because I sure as hell didn't."

And since the current president of the United States believes bragging about sexual assault is nothing more than "locker room talk," I don't think that fear is unfounded.

I'm afraid my son will somehow correlate a woman's outward appearance to her credibility, and adopt President Donald Trump's philosophy: that some women "aren't attractive enough to assault." I'm afraid one day he'll hear a recording of Sen. Orrin Hatch (R-UT) describing Dr. Ford as a credible, "attractive, good witness," and believe one's trustworthiness is directly proportional to how pleasing they appear to others. Even at my son's young age, I've tried to instill in him that judging an individual on their outward appearance is a fool's errand, and an eraser of one's humanity. But I fear he will succumb to the messages of his elected officials; of men in positions of extreme power who wield that power with impunity and at the detriment to sexual assault victims across the country.

I'm terrified that, one day, my son will hear my own story of sexual assault, and question my credibility, too.

I'm afraid my son will become one of the one in 10 men who will be victims of sexual assault in their lifetime, and that, due to a toxic weave of hyper-masculinity and victim-blaming, no one but his father and I will believe him. I'm afraid he won't come forward at all, convinced that being victimized by someone is a sign of weakness that forever taints your worth as a human being.

And I'm terrified that, one day, my son will hear my own story of sexual assault, and question my credibility, too. Perhaps he won't believe me because I can't remember every detail of what happened that night, or will blame me for the assault because I had been drinking. Perhaps he will scrutinize the pajama pants and tank top I was wearing, or wonder why I would be the only woman at an otherwise all-male gathering if I knew the potential risks.

Like Don Dr., I am afraid for my son; afraid that all of my hard work as his mother will break under the weight of a misogynistic society that blames victims and defends abusers. I'm afraid that I can give it my all; dedicate every small and large teaching moment to the importance of consent; reiterate how toxic masculinity not only harms young girls and women, but harms boys and men, too, and still a rape culture that informed the teachings of Donald Trump's father, and the teachings Don Jr. has so clearly embraced, will somehow seep into my son's psyche, too.

I'm afraid my son won't listen to people like me, Don. I'm afraid he will listen to men like you.