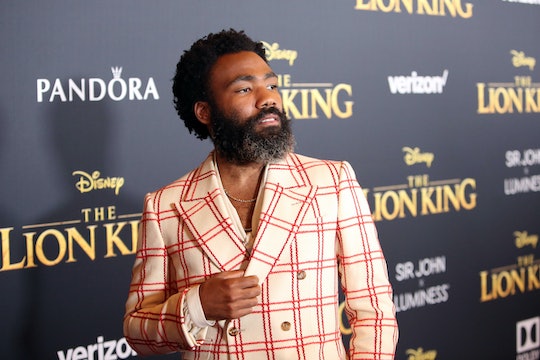 Whether it be the stunning visuals, the star-studded cast, or its amazing soundtrack, Disney fans simply can't wait to see The Lion King. Well, on a second thought, it's probably the star-studded cast people are pumped to see, which includes stars like Donald Glover, comedian Billy Eichner, and the queen herself, Beyoncé. So, really, it shouldn't come as much surprise to anyone that Donald Glover's son is pumped to see The Lion King for the same exact reason as everyone else. Spoiler alert: it's for Beyoncé, y'all.

Glover tends to keep his personal life pretty private. The father of two boys with his girlfriend, Michelle White, hasn't shared much about either of his kids since he became a dad for the first time in October 2016. And while Glover doesn't often discuss fatherhood, he's beginning to let people in on that part of his life.

Glover, who voices (adult) Simba in the 2019 remake of The Lion King is clearly looking forward to the movie being released — and his 2-year-old son, Legend, is too, according to E! News. During an appearance on Jimmy Kimmel Live!, Glover said that he asked Legend if he was excited to see the film, he had the most perfect response — ever.

I mean, his son has a point. Beyoncé, who plays Glover's love interest, Nala, in the film, is already rave reviews for suiting her role in the film "perfectly." Although Beyoncé can't be seen in the new film (which is nearly two hours long, according to ScreenRant), people will definitely be able to recognize her incredible voice throughout the film. That, and the songs that she sings, are enough reasons for anyone to want to see The Lion King — including 2-year-olds. Like most parents would be, Glover was surprised to know that his son even knew that Beyoncé was starring in The Lion King, too. "I'm just saying, Beyoncé has people who haven't even seen television loving her," he told Kimmel. "She's incredible."

But loving Beyoncé is something that is instilled in a lot of people since birth. Glover might be surprised to wake up one day and find that his son knows all of the dance moves to "Single Ladies." These aren't things that are learned — some people really do wake up one day to find themselves knowing everything about Beyoncé

All jokes aside, Beyoncé isn't the only reason to want to see The Lion King when it officially hits theaters across the nation on Friday, July 19. There's the incredible soundtrack, the gorgeous animation, and the fact that people are so excited to compare it to the original animated version from 1992.

Although his son might be disappointed to learn that his dad isn't too close with Beyoncé, Glover did tell Kimmel that they are on a first name basis with each other. Maybe one day he'll introduce his sons to her. But until that day comes, Glover's sons can relish in the fact that their dad got to star in the same film as Queen Bey.