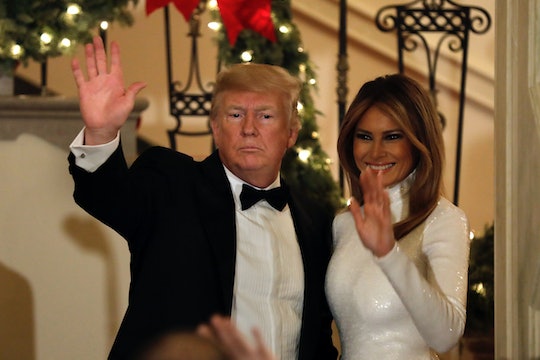 It's that time of the year, folks — President Donald Trump and First Lady Melania Trump's official Christmas portrait is finally here. Melania revealed the official photo via her Twitter account Tuesday, while wishing the public a Merry Christmas. But instead of invoking holiday cheer, Donald and Melania Trump's 2018 Christmas card has people on Twitter curious about a number of things.

It's no secret the White House is rife with drama more often than not. Amid all of this chaos, Trump and Melania somehow managed to take their annual Christmas photo on Dec. 15, in the Cross Hall of the White House. Trump is sporting a tuxedo for the shot, while Melania opted for a long white dress. The smiling couple are flanked by twinkling trees adorned with red ornaments because they ran out of their infamous blood trees, I suppose.

To top it all off, the pair projected snowflakes onto Cross Hall's ceiling. How festive.

As one might imagine, there are questions circulating about the Christmas card. From the blood trees (Melania chose crimson red trees to decorate the White House with) to Trump's MIA family, many people are confused.

About Those Blood Trees...

"Wait...what happened to the blood trees?" someone asked on Twitter.

"Where are all the blood red Christmas trees?" one person wrote.

One person joked: "Do they have to photoshop the two of you together?"

"Is it just me, or does this look photoshopped?" someone else chimed in.

"Surprised to not see the whole family... Or his cabinet....," another person added.

"Beautiful! No Barron though?" a commenter asked.

"Poor Barron. No family portrait? He *lives* there!" another commenter added.

It should be noted that it's completely reasonable that Barron was left out of the photo as to protect his privacy and keep him out of the spotlight.

No Feet For Christmas

"They don't appear to have feet," a Twitter user pointed out.

"No feet?! Only the best photographers?!" someone else joked.

As for Melania and Trump's 2017 Christmas card? It didn't include Barron or their other family members, so it's not too surprising they did the same thing this time around.

Translation: It's clear the Trumps don't deviate from their traditions often. When next year's card rolls around, I expect they'll go for a similar scene (decorative trees and fancy attire galore) and Twitter, as usual, will be there to investigate.