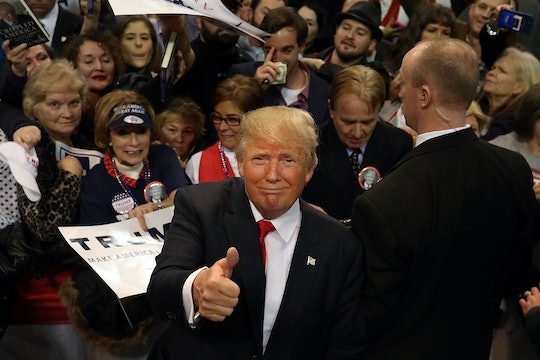 In Tehran, they're burning down the Saudi embassy, you see that? Now, what that is is Iran wants to take over Saudi Arabia. They always have. They want the oil, OK? They've always wanted that.

It’s actually a popular theory with the Republican candidates. Rick Santorum has also suggested that Hillary made ISIS during her tenure as Secretary of State. It’s a good tactic to try to convince voters that foreign policy under Clinton would be very much more of the same.

Santorum said in earlier this fall that “ISIS is a creation of a political decision by Hillary Clinton and Barack Obama to abandon Iraq — against all of our generals’ recommendations, against all of the policy recommendations. Barack Obama and Hillary Clinton, under her watch, decided politics above the security of our country and the stability and security of the world.

His accusations come just days after Trump’s appearance in a recruiting video for Al Shaabaab. According to reports, the video is focused on Trump’s plan to block all Muslims from entering the United States. He told John Dickerson on CBS’s Face The Nation last month that he wasn’t concerned about them using his words to recruit and radicalize others. Trump said, “They use other people, too. What am I going to do? I have to say what I have to say."

While he was mainly focused on ISIS and calling Hillary out for her foreign policies, he didn’t say mention anything about the Al- Shaabaab video at the rally. Trump is currently leading in the Republican polls, so his supporters don't seem to be concerned about the effects of his national security platforms already. Hopefully at the next debate, he can explain how Clinton and President Obama created ISIS for voters.