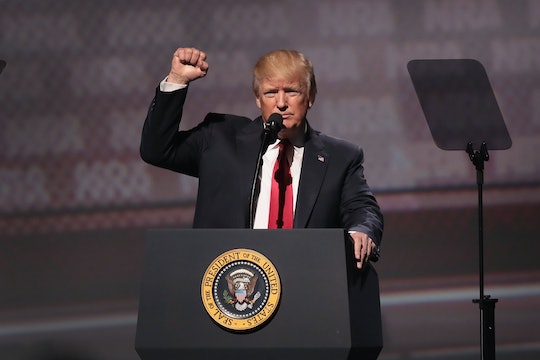 During a speech to the National Rifle Association on Friday, the president decided to deride one of his most vocal political opponents by using a racial slur. President Trump called Senator Elizabeth Warren "Pocahontas" again during his NRA speech, reviving an insult that he had originally used several times during his presidential campaign. In the past, the president defended the slur by arguing that Warren "made up" her Native American heritage, a heritage that was questioned when Warren ran for senator in 2012.

Speaking to the NRA in Atlanta, Trump said:

I have a feeling that in the next election, you're going to be swamped with candidates, but you're not going to be wasting your time. You'll have plenty of those Democrats coming over and you're going to say, "No, sir, no thanks." ... "No, ma'am," perhaps "ma'am." It may be Pocahontas, remember that. And she is not big for the NRA, that I can tell you.

The question of whether Warren actually has Cherokee ancestors has been debated for a while, and Trump has used that debate as an excuse for his "Pocahontas" nickname for Warren. Romper reached out to the White House for comment on Trump's speech on Friday, but did not receive a response immediately.

"She made up her heritage, which I think is racist," Trump told NBC in June last year. He continued:

Warren told NPR in 2012 that she was very proud of her Cherokee heritage. "These are my family stories. This is what my brothers and I were told by my mom and my dad, my mamaw and my papaw," she said. "This is our lives. And I'm very proud of it." Critics said Warren's claims furthered her academic career, while the schools that hired her said her ancestry was not involved in the decision to hire her on.

In this discussion, however, it doesn't matter whether Warren's claims of Native American ancestry are accurate or not. What does matter — and what's incredibly alarming — is that the president of the United States is using a racial slur to deride someone on a national stage. He is belittling Native Americans by whittling a group of communities (incidentally, all minorities and all marginalized for decades now) down to a single, inaccurate stereotype.

"He needs to quit using language like that," Rep. Tom Cole, a Republican from Oklahoma and a member of the Chickasaw tribe, told The Washington Post last year when Trump first came up with the charming moniker. "It’s pejorative, and you know, there’s plenty of things that he can disagree with Elizabeth Warren over, this is not something that should, in my opinion, ever enter the conversation. ... It’s neither appropriate personally toward her, and frankly, it offends a much larger group of people."

Trump is more than welcome to believe Warren is a fraud and to disagree with her policies. That's perfectly acceptable — and a fairly routine part of politics that Americans have come to expect. However, using an ethnic slur perpetuates stereotypes, insults minorities, and extends Trump's insult to an entire group of people, rather than to Warren alone.

As president of the United States — a United States that includes the very minorities he's disparaging — maybe Trump should consider withholding the racial slurs when he's attacking his political opponents.