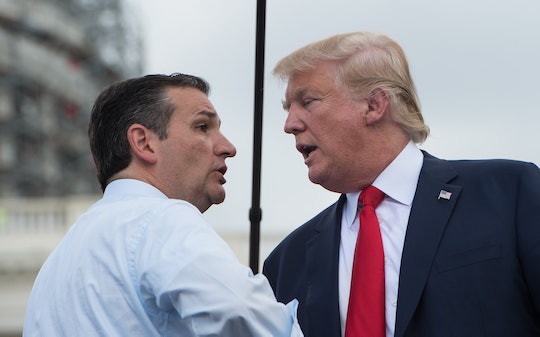 Donald Trump Attacked Ted Cruz On Twitter, But Is Anyone Really Surprised?

Senator Ted Cruz has thrown down the gauntlet in a war of words against fellow presidential candidate Donald Trump, and he likely did not even realize it. Trump tried to launch a Twitter war against Ted Cruz on Friday. The provocation was apparently a New York Times report that Cruz criticized Trump and Ben Carson’s judgment and leadership in a leaked audio recording from a private fundraiser in New York City on Wednesday. In it, Cruz is reportedly heard voicing his disbelief that Carson or Trump could win — an outcome which could potentially bode well for Cruz, as many have speculated that he has strategically aligned himself to absorb Trump and Carson supporters in case either drop out of the race. In public, Cruz has so far held off on commenting negatively on either of the two competitor’s campaigns, but in the private audio commentary, he reportedly goes into greater detail about what he considers Trump and Carson’s shortfalls:

You look at Paris, you look at San Bernardino, it’s given a seriousness to this race, that people are looking for: Who is prepared to be a commander in chief? Who understands the threats we face?

Trump previously declared that he would not attack Cruz unless he attacked first, so it's unsurprising that once news of Cruz comments surfaced in the New York Times, Trump decided to hit back:

In a second tweet, he also criticized Cruz for the leaked nature of the statements, which seemed to show him saying something different in private than he does in public:

Cruz sent out his own tweet later that day in response, seemingly attempting to diffuse the rift:

What happens next is yet to be seen, but Cruz had to know he’d be on the receiving end of Donald Trump’s Twitter comments eventually. After all, Trump is not shy when it comes to taking aim at his critics. And if Cruz isn’t quite yet sure how to move forward, he may want to look at some of Trump’s previous Twitter wars for some pointers:

First up is Trump’s fellow GOP candidate — and notably, the only female Republican in the game — Carly Fiorina. Trump didn’t wait long to lob some shots her way, commenting on everything from her business and political prowess, which is admittedly better than Trump's comments about Fiorina's face.

Although Fiorina has yet to start a Twitter war wiht Trump, she has thrown some subtle shade at Trump in interviews.

Senator Rand Paul has also been on the receiving end of Trump vitriol, with Trump calling him a “lightweight” and an embarrassment.

But Paul isn't taking Trump's comments too seriously or even to heart. In a September appearance on CNN's News Day, Paul referred to Trump as a clown and questioned how anyone could consider him a fit presidential candidate.

Former New York Governor George Pataki is no fan of Donald Trump, and received the expected Trump Twitter-lashing as a result.

These comments only fueled Pataki's disdain for Trump, and made sure people knew he wouldn't vote form Trump.

Oh, Jeb. Despite languishing in the polls, Jeb Bush has frequently been a target of Trump criticism, which can get pretty harsh.

Trump has also associated Bush with Nazis and even attacked his wife on Twitter. But Bush never takes the comments lying down and engages with Trump in Twitter wars fairly regularly.

Ah, Trump, ever the team player. With The Donald’s frequent Twitter attacks against pretty much anyone who criticizes him, it was only a matter of time before they started flying Ted Cruz’s way. At least Cruz knows he wasn't singled out?