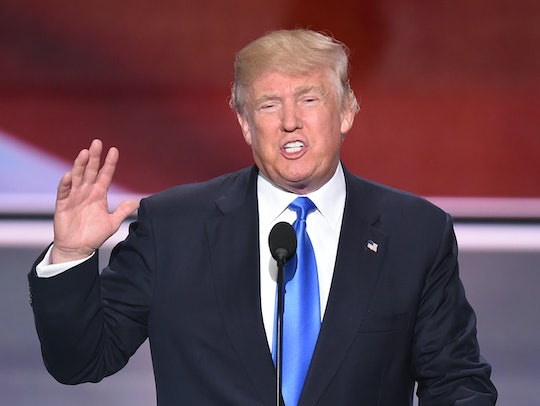 Well, it actually happened. Though at first many saw his campaign as a joke, Donald Trump is now officially the Republican presidential nominee. And, oh boy, the internet has a lot of feelings about it.

Despite all the talk of #NeverTrump, and delegates walking out or booing during the convention, the former reality star and beauty pageant aficionado easily gathered the number of delegates needed to secure the nomination, with the delegation from Trump's home state of New York putting him over the top.

It was a rise that stunned almost everyone, except for possibly Trump himself. (You can say a lot about him, but not that he doesn't believe in himself.) In the beginning stages of his campaign, many on social media and elsewhere viewed the man with the hair as a source of amusement, shaking up the race but not likely to win it. But now, improbably (and to many, terrifyingly), he will be on a national debate stage come autumn. After that, who knows? He could get access to the nuclear codes. The ghostwriter for The Art of the Deal recently told the New Yorker that, if that happens, he believes "there is an excellent possibility it will lead to the end of civilization."

As expected, Twitter blew up in the wake of the news.

Of course, some people were happy about the candidate's surprising rise:

But many on the opposing side took it as a cue to roll up their sleeves and make sure that Hillary Clinton runs as strong a campaign as possible, including Clinton's official Twitter account:

Trump has yet to officially accept the nomination, but surely once he does, there will be plenty more about which those on social media can react. Those paying attention to the election, and even those who have somehow managed to avoid coverage until now, are likely in for a long road to the general.