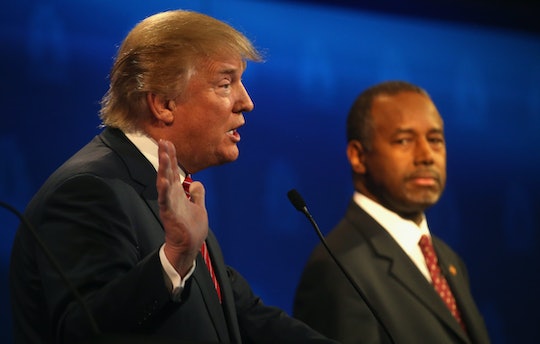 It looks like the GOP's two main front-runners, Donald Trump and Ben Carson, just became an even bigger deal. According to a spokesperson for the Department of Homeland Security, Trump and Carson will be receiving Secret Service protection effective immediately, according to CNN. DHS spokeswoman Marsha Carlton announced in a statement: "Homeland Secretary Jeb Johnson has authorized United States Secret Service protection for both Donald Trump and Ben Carson."

While we're used to seeing presidents trailed by a security detail, we're less likely to associate presidential candidates with Secret Service protection. But it's actually pretty common — even among vice presidential candidates, like Sarah Palin back in '08. Still, Trump and Carson will be the first amongst the 2016 group to get a security detail fit for the prez. (Hilary Clinton is an exception, thanks to her former first-lady status.)

When asked how decisions about protection are made, department spokeswoman Carlton explained in a statement:

Both Trump and Carson requested Secret Service protection earlier this month. And when making determinations for protection of presidential candidates, the Department of Homeland Security considers a number of criteria like their standings at the polls, the amount of money they've raised, and the threats they've received.

Considering Carson and Trump have been doing pretty well against their fellow GOP candidates (of which there are a ton), it's easy to see why their security was ranked as a priority. While there's no word yet on who will follow suit next, my money's on Rubio and Fiorina for sure.

Of course, not everyone's a fan of giving candidates a security detail before they've even been elected into office. After all, it ain't cheap.

To be honest, they do have a point. On the other hand, running for prez does put you at a much higher risk, now that you're entering into the public eye in a whole new way.