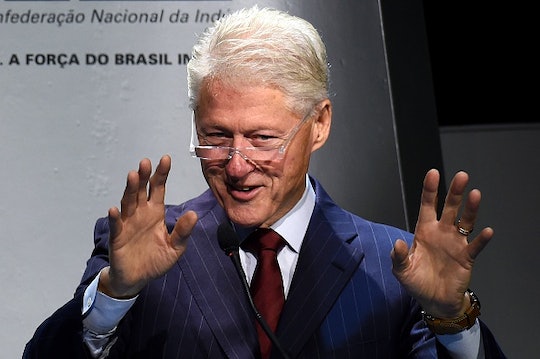 On Saturday, Donald Trump decided to turn his focus from being sexist towards Hillary Clinton to accusing her husband, Bill Clinton, of being sexist. In a tweet, Trump said Bill Clinton has a "penchant for sexism," using Hillary's own words about Trump against her. But what the Democratic presidential nominee probably doesn't realize is that his comment is a bit irrelevant (not to mention a case of the pot calling the kettle black.) Because, unless he's forgotten, Bill Clinton isn't running for president — Hillary is.

Though these remarks shouldn't come as a huge shock. A business mogul, Trump hasn't shown himself to be a feminist by any means. In the past, he's claimed that breast pumping is disgusting, attacked women over their looks, and implied that all women are attracted to his power or fortune. And when it comes to Hillary Clinton, he's had plenty of sexist comments for her. At a recent rally, Trump said Hillary got "schlonged" when she lost to Obama in 2008. He also retweeted a fan who said, "If Hillary Clinton can't satisfy her husband what makes her think she can satisfy America?" (but then showed a surprising modicum of sense when he quickly deleted the tweet.)

The truth of the matter is, yeah, Bill Clinton doesn't have an awesome history with women. He was impeached after his affair with Monica Lewinsky (who could ever forget his famous "I did not have sexual relations with that woman"?). In 1998, he settled a sexual harassment lawsuit, giving Paula Jones $850,000, though he never admitted any wrongdoing. He also had a 12-year affair with Ginnifer Flowers, during which time she scored a state job.

In other words, yes, Bill Clinton's had a few kerfuffles in his day. But his actions shouldn't matter at all when it comes to Hillary Clinton running. Sure, you wouldn't want that sort of behavior in your own marriage, but you're voting for Hillary Clinton to run the United States, not to serve as a relationship role model.

When it comes to women's issues, Hillary Clinton seems to be on the right track. Her campaign promises to work on closing the wage gap, guaranteeing paid family leave, and improving reproductive rights and access to legal abortions for women. Trump, on the other hand, wants to defund Planned Parenthood; he has little to say about the wage gap ("You’re gonna make the same if you do as good a job [as a man]"); and when it comes to family leave, doesn't really have an answer: "I think we have to keep our country very competitive, so you have to be careful of it."

Everyone's relationships are personal, and it's dangerous to look at candidate's personal lives rather than the issues that they choose to back. It can be easier — as humans, we automatically relate to personal stories. When it comes to running a country, however, let's stick with stances.