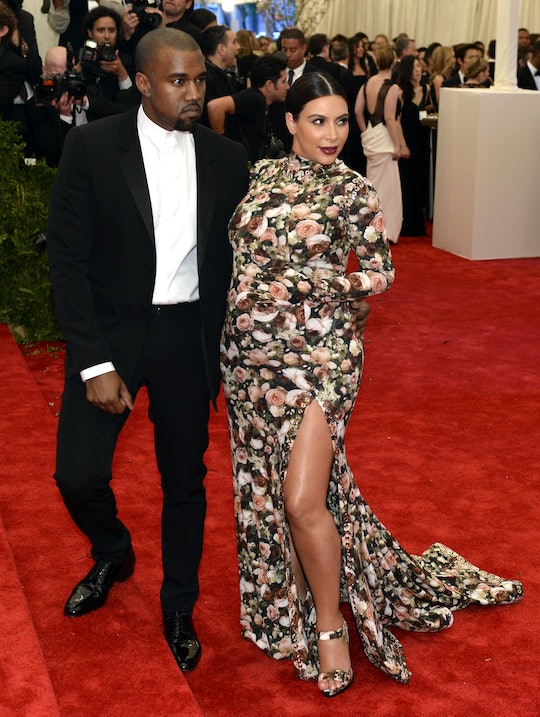 He might not know much about the nuclear triad or Crimea, but when it comes to ladies, presidential nominee Donald Trump has one rule: no fat chicks. So it shouldn't come as a surprise that Donald Trump called a pregnant Kim Kardashian "a bit large" in an old interview from 2013, proving yet again how little respect he has for women. Trump's campaign did not immediately respond to Romper's request for comment.

In addition to publicly shaming the reality star for having the nerve to gain weight while pregnant, Trump criticized the way Kardashian was dressing her baby bump too. Classy guy.

It was 2013 and Kim was pregnant with her first baby North. Trump was asked by HLN's Showbiz Tonight what he thought about Kardashian's decision to create a gift registry for her baby shower, even though she's a very wealthy woman. That seems like something Trump might be qualified to comment on, right? But Trump decided to take the conversation in a decidedly different direction, according to a YouTube video of the interview:

She's a nice person. I've known her over the years. She's really a nice person. She's gotten a little bit large. I would say this, I don't think you should dress like you weigh 120 pounds.

Trump's fixation on using a woman's weight to humiliate them is starting to look like a pattern. Of course there were the despicable "fat" insults he hurled at Rosie O'Donnell after she criticized him and his business in 2006. Trump has lashed out at O'Donnell on many occasions ever since, calling her "loser" and a "pig" among a litany of other insults, the latest of which was during the first presidential debate, a full decade after their feud first began, according to CNN.

Before Trump's campaign and before he reignited his war with O'Donnell, she reflected on the nasty things he had said about her in the media, according to CNN:

Probably the Trump stuff was the most bullying I ever experienced in my life, including as a child. It was national, and it was sanctioned societally. Whether I deserved it is up to your own interpretation.

She didn't. And no woman deserves attacks on her looks.

Another person Trump has taken aim at is Alicia Machado, a 1996 Miss Universe pageant winner who has come out to tell her own story of being publicly fat shamed by Trump after winning the title in his pageant.

Trump's rival, former Secretary of State Hillary Clinton brought up Trump's treatment of Machado during the first debate. She said he called her "Miss Piggy" because she gained weight and "Miss Housekeeping" because she's Latina, according to CNN. It's a horrifying way to talk to any women, much less someone working for you. But instead of apologizing, Trump went on Fox News the morning after the debate to assure America Machado really did gain weight, in some warped effort to defend his actions rather than explain them or apologize.

"She was the winner, and she gained a massive amount of weight, and it was a real problem," Trump said, according to People.

As for Kim Kardashian, she's speaking out publicly to say she's voting for Hillary Clinton in a move that surprised no one. She wrote a heartfelt post on her site to say "#StraightUp, I'm With Her."

"I found that without a doubt, I stand with Hillary," Kim wrote. "I'm with her. I believe Hillary will best represent our country and is the most qualified for the job. This year, I'm not just voting for myself, but also for my children, and I took that into careful consideration when I made my decision."

I have a feeling there might have been a couple of other things she took into consideration, including his disgusting comments about her pregnancy body. Comments like those sting and are hard to forget, especially for women. Someone might want to tell Trump about that.