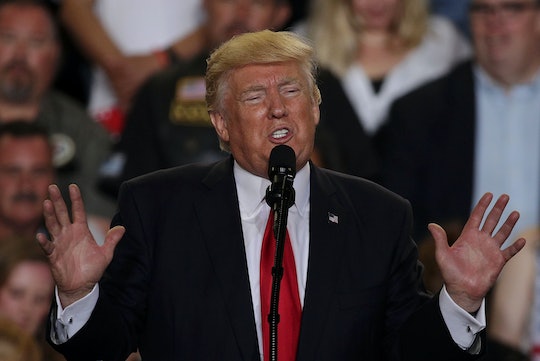 President Donald Trump can't help but align himself with a former president whose legacy includes rampant racism and oppression. In an interview that airs Monday, Donald Trump compared himself to Andrew Jackson, the populist slaveholding seventh president who's responsible for the Trail of Tears. Then, in musing over what he believes to be Jackson's greatness, he said he's really not sure why the Civil War happened, after all. The clip shows that Trump badly needs a history lesson — but there's hardly reason to believe that a Trump who has all his facts straight about Jackson's true legacy wouldn't simply go on calling himself a fan.

Trump's latest round of publicly praising Jackson and identifying with him happened during an interview with Salena Zito for an upcoming edition of Main Street Meets the Beltway on SiriusXM radio. "They said my campaign is most like, my campaign and win was most like Andrew Jackson with his campaign," Trump says in the interview. "... And he had a very, very mean and nasty campaign. Because they said this was the meanest and the nastiest."

Trump's adulation for Jackson is no surprise, considering his well-documented nationalist views. In fact, his chief strategist, Stephen Bannon — an ultraconservative figure whom some on the left have blasted as a white supremacist — has carefully cultivated the association in Trump's mind.

Trump didn't stop there. Instead, he went on to showcase his less-than-elementary knowledge of American history:

I mean, had Andrew Jackson been a little later, you wouldn't have had the Civil War. He was a very tough person, but he had a big heart and he was really angry that he saw what was happening with regard to the Civil War. He said, "There’s no reason for this." People don't realize, you know, the Civil War, you think about it, why? People don’t ask that question, but why was there the Civil War? Why could that one not have been worked out?

The short answer for why the Civil War raged between the North and the South is slavery, of course. And that's certainly a question that historians, intellectuals, and Americans in general have grappled with for more than a century.

But the even more striking part of Trump's stream of consciousness is his confidence in asserting that Jackson himself was closely monitoring the Civil War and that his official proclamation was that there was no reason for it. It seems a bit far-fetched, as Jackson died 16 years before the war started in 1861. Further, as a man who owned slaves, he more than likely would have known very well what was at stake.

This is far from the first time that Trump has praised Jackson. At a dinner back in January, he insisted of his winning campaign that "There hasn't been anything like this since Andrew Jackson." And, when he visited Jackson's Nashville plantation in March, Trump said he was a fan of the former president.

Jackson was no friend of women's rights, according to Smithsonian Magazine. Some would say his views on many such issues do closely mirror Trump's. But here's a huge difference in their presidencies: Jackson won the popular vote; Trump quite famously did not.