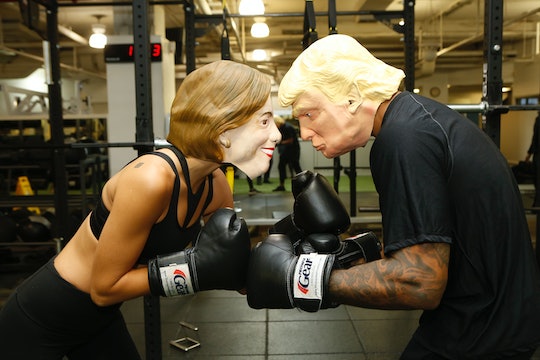 Halloween is but a few days away, and if you haven't yet found the perfect costume, the good news is, the 2016 presidential election can provide a ton of inspiration. Of course, there are plenty of options for those who want to dress up as Republican presidential candidate Donald Trump (Trump masks and wigs are big this year), but if you'd rather take a more nuanced approach, these Donald Trump costume ideas inspired by some of his more outrageous campaign moments might be more your speed.

Thanks to the election's proximity to Halloween, Trump costumes (as well those inspired by Democratic presidential nominee Hillary Clinton) are big sellers. But costume retailer Party City told CNN that Trump costumes are more popular, and that, actually, Trump costumes have always been fairly popular, even before he became the GOP nominee (think Apprentice-style, "you're fired!" options). These days, people seem to be getting a big kick out of impersonating the "bigly" controversial candidate, as well as his "did he really just say that?" campaign moments. But you don't actually have to dress up as Trump himself to rock a pretty awesome Trump-inspired costume.

Let's face it: the comments Trump made in the leaked Access Hollywood audio, where, according to TIME, he described making unwanted sexual advances on women, was entirely horrifying. But in the wake of the scandal, women hit back, turning his “grab them by the p*ssy” comment into a clever, cat-themed battle cry. The best part about this DIY costume is that black cats are already a perennial Halloween staple, so transforming a basic cat costume into a feminist Trump-themed statement is pretty easy.

I'm pretty sure a lot of viewers' jaws dropped when Trump argued during the final presidential debate that there were "bad hombres" in the country that needed to be kept out by greater border security. As Salon noted, Trump's comment was just one more shockingly-offensive jab at Mexicans, and followed his previous comments claiming that Mexican immigrants were rapists and drug dealers.

Twitter quickly took Trump to task over his comment, and it wasn't long before #badhombres became a trending topic. So, it makes sense that it would also be perfect fodder for a Trump-inspired Halloween costume — although with an important caveat. Even though a bad hombres costume is meant to be a dig at Trump's ignorance, it could easily veer into offensive cultural appropriation territory.

Alternatively, if you're feeling pun-y, you could always go the "bad ombre" route instead with a poorly-dyed wig?

Such A Nasty Woman

When Trump leaned into the microphone during the third presidential debate to declare that Clinton was "such a nasty woman," according to The Los Angeles Times, it quickly became apparent that someone needed to put that on a t-shirt immediately. As with many of the offensive comments Trump has made about women, this one was also swiftly co-opted as another feminist election slogan, with Clinton supporters proudly using the term to describe themselves. Looking to make a pro-Clinton statement with your costume? Let your nasty woman flag fly on Halloween.

Trump's great, big, amazing, Mexico-funded wall has long been both a cornerstone of his immigration policy as well as a punchline among his critics. And, as a costume, it's also a pretty simple one to DIY.

During the final presidential debate, Clinton accused Trump of being a "puppet" for Russian president Vladimir Putin. Trump's response, according to CNN? "No puppet. No puppet. You're the puppet. No, you're the puppet." The debate is still out on who the puppet is, but this Halloween, you could be the puppet — maybe a Trump-infused, Pinnochio-esque creation?

Another particular Trump campaign low-point was when the GOP nominee defended his awful Trump tape comments as "locker room talk," according to Fortune. Since then, many have argued that, uh, that's certainly not how they've ever talked in a locker room. But, if you ask me, Twitter user Peter Johanns took his rebuttal one step further, totally nailing it with this "locker room talk"-inspired costume.

Honestly, the madness that has been this election cycle can sometimes feel totally disheartening because of how much is really at stake. But on Halloween, at least, stressed out voters all over the country will have a chance to make fun of some of the elections biggest WTF moments. And that means it's pretty much inevitable that some incredible Trump-inspired costumes are going to happen as a result.