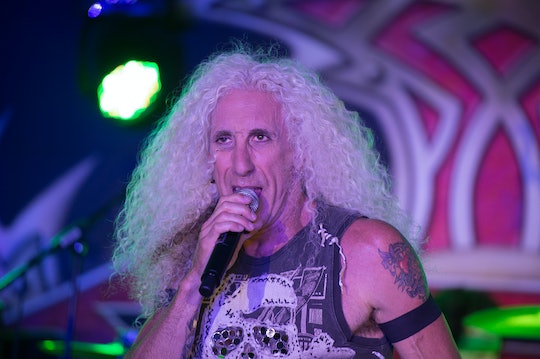 Donald Trump Gets Permission To Use Twisted Sister Song For Campaign

Noted person with interesting hair Dee Snider recently dropped a bombshell during an interview with Canadian Business: it seems he’s given other noted person with interesting hair Donald Trump permission to use his 1984 hit “We’re Not Gonna Take It” as Trump's official campaign song. According to Snider, the pair became friendly during Snider's brief stint on Celebrity Apprentice in 2013. Snider described Trump's request to use the song:

He called and he asked, which I appreciated. I said, ‘Look, we don’t see eye to eye on everything—there are definitely issues that we’re far apart on.’ But thinking back to when I wrote the song and what the song is about, it’s about rebellion, speaking your mind and fighting the system. If anybody’s doing that, he sure is. Trump and Bernie Sanders are the two extremes. They’re raising holy hell and shaking everything up. That’s what ‘We’re Not Gonna Take It’ is about. And we’re friends. I have spent time with Donald and his family. I don’t think either of us expected that we would like each other, but you know, Donald Trump is a pretty chill guy. He’s a frontman. When that camera goes on, he furls his brow, he does his thing. Off-camera he’s very self-deprecating. He makes jokes about being too orange and about his hair.

This just may be the most shocking duo since Gwen and Blake, but Snider really seems to like the Donald. After all, Entertainment Weekly notes that Paul Ryan also tried to use the song during his vice presidential campaign in 2012, but Snider said no.

We already know that Hillary Clinton has a whole slew of campaign songs; her Spotify “Official Hillary 2016 Playlist” features Pharrell Williams, Katy Perry, Ariana Grande, and many other artists beloved by hip, young people who know what Spotify is. But what about the other candidates? To save them some time, I’ve picked out what I feel are the perfect songs: