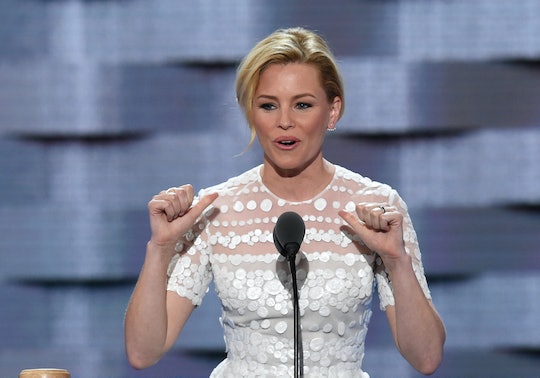 On Tuesday night, Elizabeth Banks took to the stage of the Democratic National Convention and proceeded to rip Republican presidential nominee Donald Trump a new one. The actress compared Trump's candidacy to The Hunger Games, the dystopian book and movie series for which she's perhaps most well-known. And she's not the first to equate the two. A quick search of Donald Trump Hunger Games jokes and memes proves that Banks is only one of many to notice the disturbing comparison.

To recap The Hunger Games, in case you've somehow managed to avoid it until now: In a futuristic society, an evil dictator in The Capitol forces children from the surrounding districts to fight one another to the death in a live, televised contest. Meanwhile, those in power preen, beautify themselves with complicated wigs and costumes, and watch the chaos with satisfaction. Hmm, a reality TV-loving man who gains power by fomenting hatred and turning people against one another? I can see why people have been making the comparison.

In Banks' speech, she noted her role as Effie Trinket, whom she called,

... A cruel, out-of-touch reality TV star who wears insane wigs while delivering long-winded speeches in a violent dystopia — so when I tuned in to Cleveland last week, I was like, "Hey, that’s my act!"

Hunger Games memes featuring the orange man have been making the rounds on Twitter for months now, with a particular uptick during his acceptance speech at the Republican National Convention:

Even Stephen Colbert got in on the action when he crashed the RNC last week in Cleveland dressed as Caesar Flickerman, the Hunger Games competition host. In a segment he called the "Hungry For Power Games," he ran up onstage and made jokes at the Republicans' expense, saying, when a security guard escorted him off, "I know I'm not supposed to be up here, but let's be honest, neither is Donald Trump."

In all seriousness, of course Trump has not advocated for children to be pitted against one another in an arena, slaughtering each other while the world watches. But he has advocated killing the innocent families of terrorists and punishing people who don't report their neighbors for what they deem "suspicious" activities. He has also regularly encouraged violence at his rallies, and mocked people based on their race, religion, or gender, all the while seemingly feeling no remorse and suffering no consequences. He may not be President Snow, but he's dangerous nonetheless.