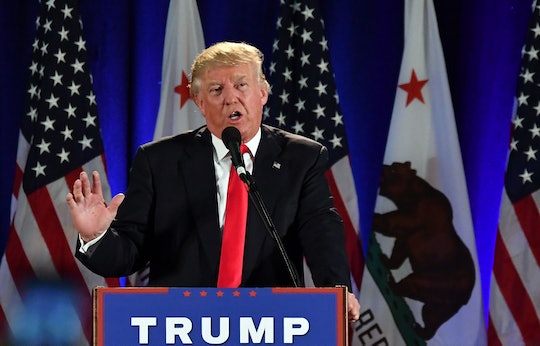 Donald Trump has perfected a strategy of deflecting the hard questions—distract, deny, and change the subject, throwing in plenty of insults and catchphrases along the way, until whoever is questioning you gets too tired, and moves onto something easier. But in an interview with CNN's Jake Tapper on Friday about Trump's criticism of a judge with Mexican heritage, the strategy didn't work. Trump ignored Tapper's questions 23 times, but Tapper kept after him until Trump finally gave a straight answer. And that answer just provided more evidence that Trump is completely unqualified to be the president of the United States.

Trump had previously said that the judge overseeing a case against Trump University, a for-profit "school" that its own employees have described as an allegedly "fraudulent scheme" that preyed upon the elderly and uneducated, has a "conflict on interest." According to Trump, U.S. District Court Judge Gonzalo Curiel should recuse himself from the case because he is "of Mexican heritage." And I'm not sure if you're aware, but Trump is building a wall. Just take a minute to acknowledge that this blatant racism is coming from the man who could be your next president. (Now, I know it's hard, but please stop screaming and crying.)

Immediately, many pointed out how problematic Trump's statement was, including Paul Ryan and Hillary Clinton. When, during their interview, Tapper brought up that Clinton had condemned Trump's attack on the judge, Trump immediately began to deflect, saying, "She's so wonderful... here's a woman who should be put in jail for what she did with her emails, and she's commenting."

When Tapper tried to steer him back on track, Trump elaborated on his remarks, saying:

When Tapper interjected to ask, "So no Mexican judge could ever be involved in a case that involves you?" Trump immediately began to ramble about this judge's membership in a "society that's very pro-Mexico," and how Trump was trying "to keep business out of Mexico." Tapper pointed out that the judge was an American (he's actually from Indiana). Trump didn't seem to care.

Finally, a few painful minutes later, with Tapper repeatedly trying to ask Trump a simple question while Trump cut him off and talked over him, Tapper was able to get the whole thing out:

TAPPER: If you are saying he can't do his job because of his race, is that not the definition of racism?

TRUMP: No. He's proud of his heritage. I respect him for that.

TAPPER: You're saying he can't do his job because of it.

TRUMP: Look, he's proud of his heritage, okay? I'm building a wall. I think I'm going to do very well with Hispanics.

That Trump cannot recognize the racism spewing from his mouth is terrifying, but not particularly surprising given all the terrible things he's said over the course of this campaign. And he's not stopping with Hispanics. On Sunday, Trump questioned whether or not a Muslim judge could be impartial to him.

If he's going to claim a conflict of interest with anyone who is a member of any group he's ever insulted or vilified, pretty soon he'll have to rule out women, the disabled, African-Americans, POWs, and anyone else who recognizes him as the dangerous maniac he is.