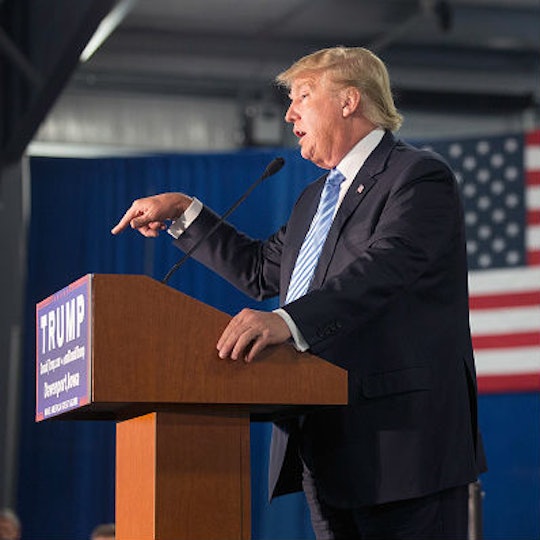 Donald Trump Is Calling For A Ban On Muslim Immigrants To The U.S., & The Candidates Aren't Having It

Donald Trump is scaring people again. The New York Times reports that Trump is calling for a ban on Muslim immigration to the United States. He claims that the country still needs to determine "what is going on" before allowing more Muslims to enter.

Although the Republican presidential candidate's words are inflammatory, he's not showing any signs of backing down. Trump's campaign released a statement from the billionaire, in which he attributed the violence against the United State to the global jihad:

Trump's statements come only a day after President Obama shared his plans to combat ISIS. In his speech from the Oval Office, Obama noted that it was important for Americans to stand together and not wage war on the Muslim community.

We cannot turn against one another by letting this fight be defined as a war between America and Islam. That, too, is what groups like ISIL want. ISIL does not speak for Islam. They are thugs and killers, part of a cult of death, and they account for a tiny fraction of more than a billion Muslims around the world -- including millions of patriotic Muslim Americans who reject their hateful ideology. Moreover, the vast majority of terrorist victims around the world are Muslim. If we’re to succeed in defeating terrorism we must enlist Muslim communities as some of our strongest allies, rather than push them away through suspicion and hate.

Banning Muslim immigrants would go against America's founding desire to welcome immigrants while fueling ISIS' perception of the United States as an enemy. Trump may be clear on where he stands, but it's reassuring to see so many presidential candidates strongly opposing his opinion and calling for inclusivity.