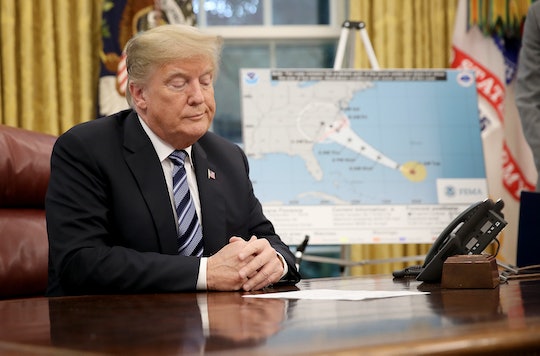 As Hurricane Florence gears up to hit the East Coast, many are looking back to the massive natural disasters that shook Puerto Rico last year. But rather than make a statement of empathy, Donald Trump falsely claimed that 3,000 people did not die after Hurricane Maria. Instead, the POTUS claims that the entire count is a scheme by the democrats to make him look bad. Yes, you read that right — unfortunately.

In a Thursday morning tweet, Trump claimed that the reports stating that 3,000 people died were inflated from a number that he estimated as anywhere from "six to 18." As of this month, the governor of Puerto Rico formally raised the death toll to an estimated 2,975 people from the previously held 64 casualties following a study conducted by The George Washington University, according to CNN.

The Harvard TH Chan School of Public Health published a similar report in May that reported as many as 4,600 deaths, and other coverage by academia and the media alike estimated the death toll in the thousands as early as December of 2017, according to The Guardian. President Trump has failed to acknowledge these findings, preferring instead to declare his administration's response in Puerto Rico as a "success."

As recently as Wednesday, Trump was singing his team's praises on Twitter for their response in Puerto Rico — ignoring the fact that much of the island was without supplies, clean water, gas, food, and power for months. His critics have compared the arguably poor response in Puerto Rico — where he took six days after the storm to even announce plans to go to the island — to the speedy response in Texas following Hurricane Harvey — just four days later.

Along with downplaying the number of deaths in Puerto Rico, Trump also tweeted out that the recent report from the George Washington University was part of a plot by the democrats to make him look "as bad as possible," as Vox pointed out. In one fell tweet, the president reduced the extensive and thorough research conducted to find the exact impact of Hurricane Maria to a baffling conspiracy against — who else — himself.

The response to his tweets about the impact of Hurricane Maria has been varied. While some buy into his theory that the dems are out to get him, many were appalled by his insensitivity and ignorance. One such user wrote, "Try telling the 3000 people's families that their family members didn't really die. That's basically what you just did, you disgusting human being!" Others explained that they were simply baffled by Trump's statement.

The POTUS's persistent claims that the response to Hurricane Maria was a success has even caused some of his administration to question him. During an interview on Wednesday, Trump's former homeland security advisor Thomas Bossert expressed some concern over the president's self-congratulation, according to The New York Times. “The missing part was empathy,” he said. “I wish he’d paused and expressed that, instead of just focusing on the response success.”

But Bossert went on to explain that it can be difficult to gauge cause of death in the case of natural disasters. “The people that died — thousands of people — it’s terrible, but it’s always difficult to talk about the causality of that death,” he said. But Bossert also called to caution when linking correlation and causation.

There is no denying that Hurricane Maria was a catastrophic disaster for the people of Puerto Rico. Their suffering and loss will continue to be felt for years to come. The POTUS's denial of the magnitude of the storm's impact is disheartening, but unfortunately not all that surprising.