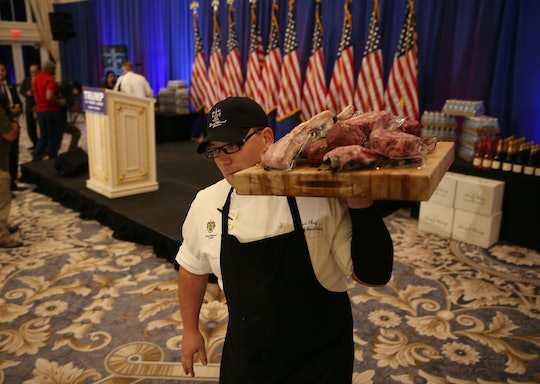 Ahead of a press conference in Jupiter, Florida on Tuesday, Donald Trump served steaks and wine to supporters. Yes, really. To further complete the scene, the steaks were supposedly his own line of steaks, the wine was Trump Wine, and the bottled water, well, you get the idea. White jacketed cater waters circled the room with beverages. Reporters and viewers on Twitter were almost gleeful in their mocking of the whole spectacle. One wrote, "Trump serving Trump wine, Trumpsteaks, and Trump water tonight. He trolls people harder than anyone ever before."

Others questioned the expiration date on that red meat, since Trump Steaks went out of business around 2012. Back in 2007, the prime Angus beef steaks were sold in the Sharper Image catalog and came in a "presentation box," according to the most hilarious promotional video you'll ever see. It turns out that Trump aides who claimed the steaks were from the defunct line were lying to reporters early on Tuesday. Later in the evening, journalists confirmed that the steaks were actually from Bush Brothers in West Palm Beach, FL. But hey, who cares? A good steak is a good steak, right? If this all weren't so very, very real, it could actually be very, very funny. But this is not a Simpsons episode. This is actually happening.

Apparently, this is how Trump thinks one makes America "great again." The leading Republican presidential candidate, who also happens to be a billionaire, gives a speech surrounded by symbols of wealth. In Florida, where the median household income is around $42,000 a year, or just about $6,000 less than the national average, not too many of those families are dining on "prime Angus beef" and bubbly for dinner. In fact, it's much more likely they are struggling to keep a roof over their heads. The lavish display of fancy food and booze only serves to make the real estate mogul seem completely out of touch with reality.

The reality, though, is that Trump is inching closer and closer to getting the nomination for the Republican party. On Tuesday, he won both the Michigan and Mississippi primaries by a landslide, CNN declared early in the evening. Trump's chances at winning the White House are actually pretty good, too, no matter what cable news channel you watch. Again, this might actually be happening.

If his campaign gear and comments about other candidates' height seemed ridiculous, speaking to the media in front of raw steaks is just out of control. The United States' place in the global economy is well situated, as is Trump's reputation for being super rich. There's no reason for him to use silly, branded foodstuffs to convince the masses that he is important or eats like a king. He's not running for the monarchy. Even giving his press conferences at his own properties is another way for Trump to showcase his wealth and power to supporters. And they seem to enjoy it.

Passing around steaks, champagne, and branded bottled water seems more like the kind of media stunt you'd expect from a dictator in a political comedy than a democratically elected president. Trump's insistence that the country has to be made great "again" and his need to show off — whether it's about having the "best words," big hands, or booting protestors from the room — is something voters should be thinking very carefully about. Now, it's just steaks and raucous rallies. But he could be off in Air Force One soon enough to broker peace deals overseas. Let's hope they like ostentatious barbecue.