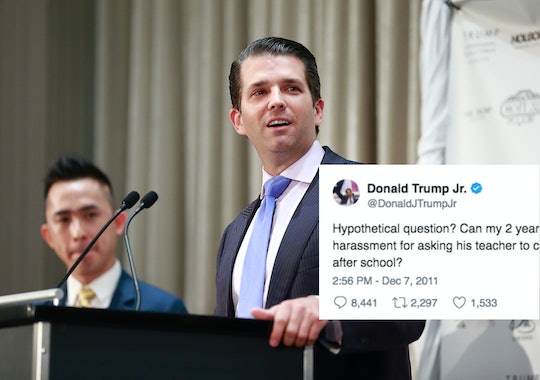 Donald Trump Jr. Joked About His 2-Year-Old Sexually Harassing Someone, & People Are Pissed

President Donald Trump is well-known for posting often-controversial tweets, and judging by his son's Twitter account, that skill may be one that runs in the family. Donald Trump Jr. is no stranger to social media blunders — in November, for example, he encouraged his followers in Virginia to go out and vote, despite the fact that the election had already taken place the day before. But unlike much of his social media commentary, this 2011 tweet from Donald Trump Jr. isn't just cringeworthy, it's actually pretty disturbing.

Trump Jr.'s Twitter account may not have been something that many people were actually paying attention to prior to his father's decision to run for president, but it's pretty clear that Trump's eldest child has a history of making some seriously questionable remarks on social media. Late night host Stephen Colbert unearthed one of those tweets Thursday, according to The Independent, in which Trump Jr. asked, "Hypothetical question? Can my 2 year old get in trouble [for] sexual harassment for asking his teacher to come to his place naked after school?"

In the context of the some of the other baffling and/or inappropriate tweets peppered throughout his feed, it seems as though Trump Jr. at least intended for the comment to be a clever joke. But to pretty much everyone else on the internet, it rightly came off as both strange and super unsettling. It's safe to say then, that Colbert pretty much spoke on behalf of everyone when he retweeted it and asked, "Non-hypothetical question: are you insane?"

If I were going to try to give Trump Jr. the benefit of the doubt here, I could maybe argue that he grew up in a strange, highly-privileged bubble, and seems to generally consider himself much more knowledgeable about, well, everything, than he actually is. Combine that fact with his attempt to be a proud and outspoken right-wing conservative, and you get unfortunate posts like the one he shared on Instagram back in October, in which he "joked" about taking his daughter's Halloween candy away to teach her about socialism. It didn't take very long at all before people jumped in to point out that he clearly doesn't understand how socialism works (and, perhaps, that he also doesn't really understand how Halloween works either). But even if we were to look beyond his poorly executed attempts at clever social commentary, his sexual harassment tweet still stands out in a category of its own.

While a few commenters appeared to try to defend the comment ("People, he said 'hypothetical'"), many of the responses expressed concern over the tweet's potentially-serious implications. For one, even if the comment wasn't based on anything specific, it's still unsettling to think that any parent would find that funny, let alone funny enough to post on social media:

Others saw the 2011 tweet as a reflection of comments made by his father in years past:

It's pretty hard to determine what Trump Jr. was thinking when he posted the comment, or what it was actually based on, but some also wondered if the post might be concerning for reasons beyond just simply being in poor taste:

But even in the best case scenario — that the tweet was just a failed attempt at a joke, and that it didn't mean anything more than that at all — the reality is still that he obviously doesn't consider sexual harassment to be something worthy of taking seriously (which, if that's the best case scenario, is pretty disheartening to say the least).

Unfortunately, that's not exactly surprising given some of his other past tweets. Although Trump Jr. has deleted a number of his more controversial tweets, BuzzFeed captured many of them for posterity in 2016, including one from 2011 in which he wrote, "At Vanessa's baby shower. Last time I was in a room with so many women there was a disco ball and a main stage if u know what I mean ;)." And in another now-deleted tweet from 2011, he wrote, "If [you're] a boob guy this whole lactation thing is amazing the sports bra the wife is wearing is losing the containment battle!!!" (charming).

Inappropriate tweets aren't the only source of controversy for Trump Jr. though. Concerns about his connections with Russia during the election, as well as his correspondence with WikiLeaks, have meant that the president's son will be expected to testify in front of the House Intelligence Committee on Dec. 6, according to CNN (though Trump Jr. has denied any wrongdoing).

Even though, unlike his sister Ivanka Trump, Trump Jr. isn't officially involved in his father's administration, the fact that he speaks out so fervently in support of his policies — and the fact that he doesn't hesitate to hit back when someone questions his positions — makes his social media presence significant. But unlike some of Trump Jr.'s political commentary, the reality is that his 2011 sexual harassment tweet is one that would stand out regardless of whether Trump had ever ran for president.

Given that he's a parent (and, really, just a person in general), it's concerning and, well, straight up weird that he'd post a comment like that, even if he meant for it to be a joke. While it hopefully has nothing to do with his actual parenting abilities (he may very well be much different in his private, family life than he appears on social media), it's one of many tweets that at least suggests that he doesn't have a particularly high opinion of women. And while that's not exactly surprising based on his lineage, it is something he certainly deserves to be criticized for.