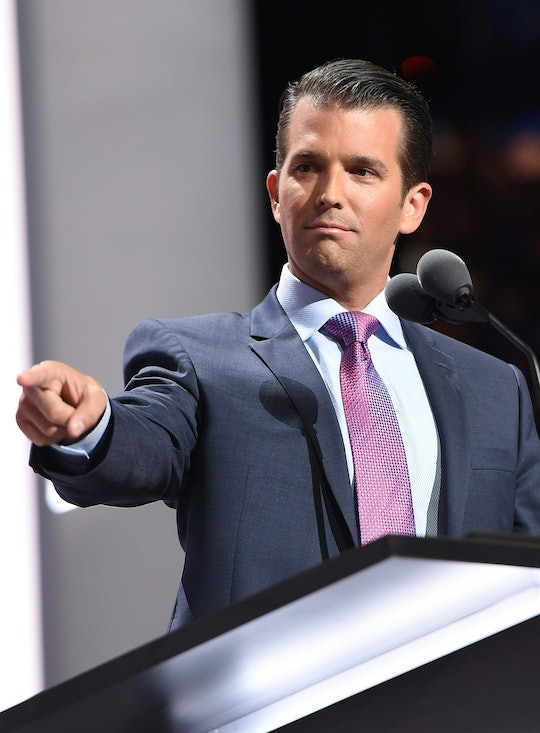 Donald Trump Jr. Referred To Women As 'Herds Of Mothers,' But Keep Talking About Pneumonia

Before this year’s presidential race, Republican candidate Donald Trump was hardly ever politically correct. Yeah, he still isn’t. In fact, his campaign has heavily focused on how opposed he is to the "political correctness" in America that interferes with the government's ability to do its job and protect its citizens. Well, this mentality may very well run in the family, because a rather tactless tweet where Donald Trump Jr. referred to women as "herds of mother" has just resurfaced. On Thursday, people on Twitter were calling out the GOP nominee's oldest son for his post from 2011 for its absurdity and some of the responses have been pretty hilarious and on-point.

"Ever notice that if u get a herd of mothers together they arent physically capable of talking about anything but birth pregnancy & diapers?” Donald Trump Jr. tweeted on July 31, 2011.

The 38-year-old father, husband, and businessman is the executive vice president of the Trump Organization and has five children — two daughters and three sons — with his wife Vanessa Haydon, a former model who he met at a fashion show after his father introduced them, according to Time.

The resurfaced tweet comes after a week of media attention on the presidential candidates' medical records, with much of the focus on Democratic candidate Hillary Clinton's bout of pneumonia and Trump's television interview about his "impressive" health with controversial physician and media personality Dr. Mehmet Oz.

While it's not exactly clear why or how this tweet made its rounds again on social media, it's blatantly obvious that folks are not OK with Trump Jr.'s categorization of women and mothers.

Here are some of the best reactions and comebacks to the crass tweet:

Trump Jr. recently had another foot-in-mouth moment during a radio interview on Wednesday when he made a reference to "warming up the gas chamber" while complaining about how the media treats his father compared to coverage that Clinton receives from the press.

"The media has been her number one surrogate in this. Without the media, this wouldn't even be a contest," Trump Jr. told Philadelphia-based conservative talk radio host Chris Stigal, according to CNN. "But the media has built her up. They've let her slide on every indiscrepancy, on every lie, on every DNC game trying to get Bernie Sanders out of the thing,"

He added, "I mean, if Republicans were doing that, they'd be warming up the gas chamber right now. It's a very different system — there's nothing fair about it."

However, following heated backlash from the comment, according to CNN, Trump's campaign denied that he was referring to gas chambers used in the Holocaust, but that he meant the "gas chamber" used in capital punishment.

This election has been especially brutal and incredibly wacky on the candidates' end, as well as from media commentators and voters on social media. Meanwhile, the way this tweet resurfaced has proven again that voters are paying close attention and are ready to fire off commentary and shut down an uncouth comment at any moment.

More Like This
All The Nights The Grinch Airs On TV In 2022
How To Watch Elf In 2022, Including A 24-Hour Marathon
Disney Introduced Its First Openly Gay Teen Character In Strange World
Kate Middleton's First Tiara Moment As The Princess Of Wales Honored Princess Diana