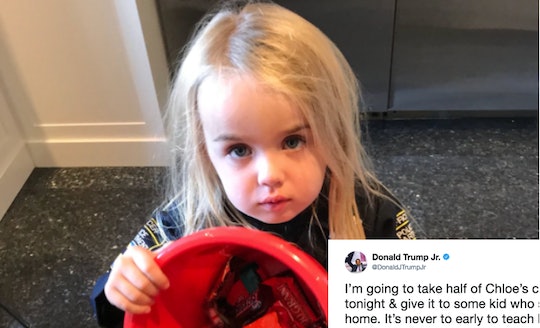 Donald Trump Jr. Used His Daughter As A Political Prop On Halloween, & It's Mega Gross

I don't know, it feels like the true meaning of Halloween has gotten away from us. Scrolling Twitter last night, after I had put my frog and Ewok to bed, the post that caught my eye was from Donald Trump Jr., 39, who had posted a photo of his daughter, 3-year-old Chloe, holding up her candy haul. "I’m going to take half of Chloe’s candy tonight & give it to some kid who sat at home. It’s never to early to teach her about socialism," he tweeted, missing something crucial about both socialism and Halloween. That isn't what bums me out, though. Seeing that photo of his kid at the end of her trick-or-treat jaunt, and reading it through a partisan, propaganda-ish lens, I thought, "boy, this is some sad sh*t."

The meaning of Halloween — and admittedly, as an Australian, I'm a latecomer to this — is to invoke paganism while demanding free candy from your neighbors, or from the residents of the nearest bougie neighborhood (put another way: a socialist candy distribution scheme). Basically, it's the one day we say to our kids: tell me what is in your soul, and then we will dress you as that. Your kid might want desperately to be a plum, or they might have designs on attaching a fake knife to their head. They might be very, very excited to dress as a space dinosaur. Halloween is about being yourself. But on Halloween night, Donald Jr. — who I also note dressed his kids as police and soldiers, then pandered about it to the Trump base — failed to let this be about his kids.

Trump Jr. had previously Instagrammed a photo of his brood in their service member costumes with the hashtag #maga, and I probably shouldn't have been surprised. But there were so many good costume ideas this year (dead old Taylor Swift, dead unicorn frappe, dead Pokemon Go, Doge, just to name a few invoked at the Bustle office), it shows such a fatal lack of imagination on his part. Instead, Trump Jr. did what he and his family did to get into the White House: used their kids to put a cute, white, female face on an administration hostile to women and families.

Front and center among the "losers" of the Trump administration are children. Given children rarely have a fortune to protect, they are generally out of step with the key Trump priority: tax reform that benefits the rich, and takes money away from the poor and middle class. It is redistribution of wealth — just not the kind Donald Trump Jr. imagine in his tweet. Already, President Trump has put forward proposals to slash funding for Medicaid and the Children's Health Insurance Program, which covers 8.9 million children. 'Gramming a pic of your adorable children, who will inherit the fortune you yourself walked into (annexed by business deals that comprise an ethical minefield), is the perfect distraction from that.

Trump Jr.'s own costume showed a similar lack of humor: in the worst and saddest remake of Point Break yet (and I have attended a live improv version that required I wear a raincoat), he wore a rubber mask to dress as his own father. Walking around trapped in his father's skin is something he does every day of his life, I cannot believe he did this by choice on Fright Night. The Trump family does not always do childhood well, as evidenced by the famous photo shoot of Baron Trump, 11, riding a life-size lion in his father's gilded penthouse, and Trump's reaction to a child dressed as a dinosaur at the White House yesterday — this is the exact reaction I can imagine him having to a ghost that A Christmas Carol's him one day for his sins against the poor.

But back to the kids.

I am guilty of using my kids as props. Two years ago I dressed my daughter as a literal ham for Thanksgiving. She slept through a lot of it, just a sort of Be Our Guest character that is stuck under a spell. This year, though, she knew what she wanted to be: I had made a whole Cindel Towani costume, which she refused to put on. At 2 and a bit, she was determined that she would be a frog. I don't know where she got that idea, but she had a full-hearted belief that simply by stating it out loud, a frog costume would materialize. And it did! (After I chopped up my husband's green v-neck and did some rush-stitching.)

I agree with virtually nothing Donald Trump Jr. has ever said. The one piece of common ground we have is in delighting in putting our kids in silly costumes and unleashing them on our neighbors. I was worried for a minute at the level of creep in some zombie animatronics down the road last night. But there is nothing quite as scary as a man who knowingly met with representatives of the Russian government to get dirt on his father's political opponent using his 3 year old as a prop in his father's regime.