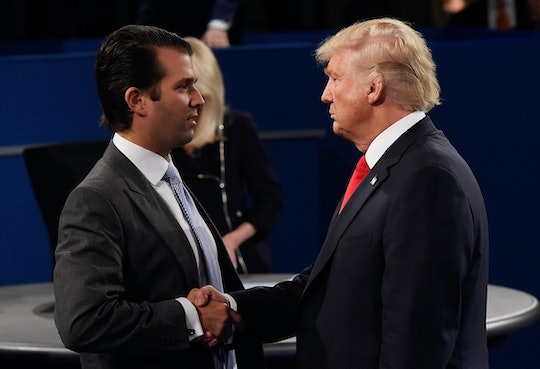 Donald Trump Jr.'s Aurora Comments Aren't The Only Unnerving Ones He's Made

What's that old saying about the apple not falling far from the tree? When it comes to Republican nominee Donald Trump's sons, the cliché totally fits, for better or worse. A review of his appearances on shock-jock radio reveals that Donald Trump Jr. joked about the Aurora shooting and made some other comments that are a little unnerving for a possible first-family member. CNN's KFile (an investigative team the network assembled by snagging reporters from Buzzfeed News) did a little work that most reporters might not have the stomach for: listening to hours of Donald Jr.'s appearance on shows such as "Opie and Anthony," "The Six Pack," and "Opie with Jim Norton." You might want to sit down for these (or settle right in with a cup of coffee, depending on how much you enjoy joking about mass shootings and Muslims).

Speaking from the heart is part of papa Trump's brand and his eldest son seems to think it's an admirable thing to do, even when it's not exactly politically correct, compassionate, or factual. Many of the cringeworthy comments Donald Jr. reportedly made during his radio appearances came well before his father was seriously in the running to be president of the United States, so it's likely that he didn't feel he could do any harm to the campaign. Some of them are as recent as last summer. (Representatives for Donald Trump Jr. did not immediately return Romper's request for comment.)

Then again, his father was caught on a hot mic in 2005 talking to Access Hollywood host Billy Bush about "grabbing" women's genitals without their consent and the verdict is still out as to whether the tape has hurt the Republican ticket all that much, so maybe being really real (like, really, really real) is what American voters admire from the Trump family.

But decide for yourself.

Here He Is Joking About The Aurora Shooting

On the very same day of the Colorado shooting, Donald Jr. listened to soundbites of witnesses and then joked that he still would give the movie "two thumbs up." Which doesn't really show a lot of compassion.

In 2011, Don Jr. was speaking about Dionne Warwick's role on Celebrity Apprentice. He went to call her a bitch, but stopped himself. At least he had a little self awareness about how that might play to female fans of the show. A host says, "you wanted to say bitch." Mini-Donald admitted that that was the first adjective that came to mind.

"I did wanna say it. ... Then I was thinking wait a second, I'm on radio, and I was like wait a second we're on satellite so I can probably say it," Trump Jr. said. Cute.

Here He Is, Upset That He Can't Mock Overweight People

In a conversation on "Opie and Anthony" in 2012, Trump Jr. compared overweight people to lazy people, lamenting that he couldn't make fun of people who are overweight due to political correctness.

"By the way you can't, you can't even make fat jokes now without, like, there's a whole segment of people that like, that's almost the worst one like, it's easier to, like, do a racial thing than it is a fat one because everyone knows they're fat and they get really offended," he said. Classy, right?

Here He Is Joking About Muslims

In 2012, again on "Opie and Anthony," the host was talking about the assassination of Mahmoud Al-Mabhouh, who was a founding member of Hamas' military wing. But they couldn't think of his name. Donald Jr. tried to help by saying it had to be "Muhammad something or other." The host bats back saying, "He had a beard. He wasn't nice to his wife."

Here He Is Talking About Immigrants

In June 2015, Trump Jr. went on "Opie and Jim Norton" just after his father announced his candidacy and reiterated the family's stance on immigrants, agreeing that "they" aren't all bad. "But, you know there's a disproportionate amount of people that are bad relative to society coming across and doing the same thing and we can't just arbitrarily let everyone in here," Donald Jr. said. He added that he didn't think anyone could say with a "straight face" that that (xenophobic) assumption wasn't reasonable.

Here He Is Talking About Lost Apprentice Footage

This one might get the eldest Trump child in the most trouble, since there are now reports that his father said some pretty nasty things about contestants in the boardroom. Donald Jr. told the now defunct "Six Pack" that he thinks the B-roll from filming the reality show would be interesting to some people, or at least those "with a sick sense of humor," like himself. Oh, I shudder just thinking about what they could have said that ended up on the proverbial cutting room floor.

On some of the other tapes, Donald Jr. also calls one of the radio hosts a "commie" for agreeing with President Obama and mocks children in beauty pageants. In a 2013 interview, Donald Jr. said that women who can't handle sexual harassment shouldn't be in the workforce.

Some on social media are pointing out the hypocrisy in dredging up old (although most of them are from within the past 3 years) audio files of the candidate's son saying outlandish things when Hillary Clinton's campaign has said that gossip about her husband, former President Clinton, is out of bounds. If we can't judge the wife for the husband, than why should we judge the father for the son? That's a fair argument.

But at this point in the campaign, and with Donald Jr. playing such an integral role in organizing his father's White House run, the gloves are off. American voters should be able to hear and see for themselves what the people closest to the candidates really believe and what their values are. The public has a good idea about what former President Clinton is about, since they lived through two of his terms in the Oval Office. Donald Trump has said that he values the opinions of his children, Eric and Ivanka included, so if one of them reportedly believes that overweight people are lazy, that sexual harassment is part of office culture, or that all Muslims are named "Ali" — that matters. There's no evidence that Donald Trump has any solid, detailed policies, yet, about anything, so he's going to need advising if he makes it to the White House.

If overweight people are lazy, do they deserve healthcare rebates? How would Trump screen Muslims if those closest to him assume they all have the same first name? These questions are as valid as wondering if Bill Clinton would be allowed to weigh in on economic policy.

On either side, the candidates should welcome this sort of investigation. If anything, it might help sway undecided voters. Both campaigns, since they're into democracy and transparency (right?), should be all about driving voter turnout in November. And "anyone with a straight face — then again, unless they're playing politics," as Donald Jr. put it so well, should think that's a reasonable stance.