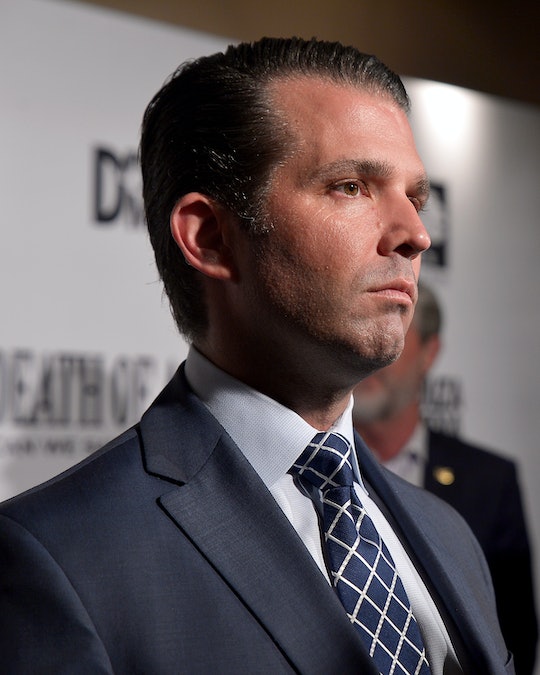 Another day, another face palm-inducing political story. Last night's El Paso rally in support of Trump's border wall was accentuated by a few choice words from his son, Donald Trump Jr. And what was intended to rally the crowd around his father's cause, became a huge political blunder targeting some of the most giving and deserving people in this country. Donald Trump Jr.'s "loser teacher" comment has Twitter fighting mad.

Trump Jr. took the stage at his father's El Paso, Texas rally with a crowd of supporters behind him, according to HuffPost. His job? To whip the crowd into a frenzy before Trump came out to further push his border wall initiative. If that was the intent, Trump Jr. certainly delivered.

"I love seeing some young conservatives, 'cause I know it’s not easy," Keep up that fight. Bring it to your schools," Trump Jr. can be heard saying in a video clip from Twitter. "You don’t have to be indoctrinated by these loser teachers that are trying to sell you on socialism from birth, you don’t have to do it." All the while, you can hear the crowd cheering him.

What this has to do with the border wall, one may never know.

As one can imagine, Twitter did not let this comment slide and by the time his father's rally concluded, social media was ablaze with criticism.

It's this kind of rhetoric that's sometimes seen as permission for Trump supporters to act out.

As a result of these sorts of comments, for example, a Trump supporter in a MAGA hat reportedly shoved a BBC cameraman and shouted obscenities at the other members of the media in attendance, while chanting "USA, USA," according to Fox News. The crowd joined in with chants of "CNN sucks." The mayhem was caught on tape.

Meanwhile, potential 2020 presidential candidate and former Rep. Beto O'Rourke held his own rally. It was purposely planned for the same time as Trump's speech where O'Rouke used his political star power to counter most of Trump's biggest claims, according to The Hill, most importantly, the claim that El Paso had become safer since the city built its border wall, a claim also disputed by El Paso's mayor.

And if you're wondering if this got under Trump's skin, it sure seemed to. He claimed that more people were at his rally than O'Rouke's, but the El Paso Fire Department said otherwise, according to Politico.

But, back to Trump Jr.'s comments about teachers. Is this really the time to be hitting teachers where it hurts? Los Angeles is still reeling from a historic teacher strike and Denver teachers are on their second day of striking for higher pay, according to USA Today. Teachers are doing their best.

This isn't the first time Trump Jr. has put his foot in his mouth this month. His tweet accusing a group of congresswomen wearing white of not wearing American flag pins totally backfired when people pointed out that no one in his family was wearing one either, according to Mashable. And of course, Twitter had a field day.

The nation is certainly at a tipping point when it comes to politics, and tempers seem to be high. Volatile might be a better word to describe it all. And Trump Jr.'s "loser teacher," comments are only one of many that will continue to plague the political conversation all the way to the 2020 finish line.