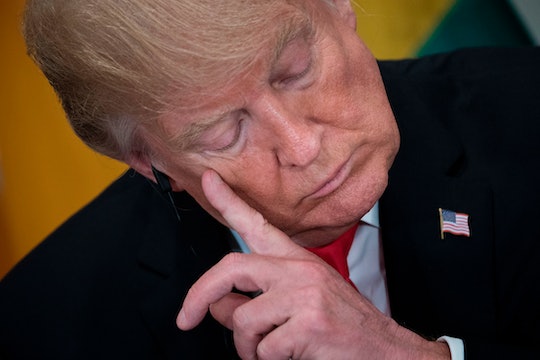 Donald Trump Made Up An African Country, & Twitter Had Some Fun With It

No matter where you stand on the political spectrum, there's no denying the fact that the current President of the United States isn't exactly experienced in politics or foreign relations. So, when President Donald Trump delivered a speech today and mentioned a country that doesn't actually exist, no one was exactly surprised. However, that doesn't mean that after Trump made up an African country people didn't have at least a little fun with it.

Speaking at a United Nations lunch event with African leaders, Trump made some remarks about things several African countries were doing really well. "Uganda has made incredible strides in the battle against HIV/AIDS," Trump said. Off to a pretty good start, right? He continued, "In Guinea and Nigeria, you fought a horrifying Ebola outbreak." Solid points, there. A neutral and complimentary comment, right? Well, that's where it ends. Next, Trump stated, "Nambia’s health system is increasingly self-sufficient."

In case you skipped geography in high school, allow me to let you in on a little secret: Nambia is not an African country. In fact, there is no country in the world named Nambia. Nambia might as well be Genovia in terms of reality.

So, after his remarks, internet users were understandably baffled at how the leader of the free world could make such a prominent mistake. And their reactions? Those, are real.

It's still unclear whether or not Trump actually meant to say "Nambia," or if he maybe misread his notes. But mistake or not, he still didn't catch it, which is pretty problematic.

In fact, as The Washington Post pointed out, Trump said "Nambia" not once, but twice during his speech to African leaders. Starting his speech, Trump said, "I'm greatly honored to host this lunch, to be joined by the leaders of Côte d’Ivoire, Ethiopia, Ghana, Guinea, Nambia, Nigeria, Senegal, Uganda, and South Africa."

Yeah, he let "Nambia" slip twice. However, the White House, for its part, has uploaded an "official" transcript of Trump's speech in which they replace "Nambia" with "Namibia," hinting that perhaps that is what Trump was attempting to say.

Of course, whether or not Trump intended to make up an African nation, the fact still remains that he did, and Twitter users could not pass up such a prime opportunity to poke a little fun at the president.

And honestly, who could blame them? The President of the United States, the highest elected official in one of the world's most powerful nations literally spoke about a non-existent country in front of other world leaders, and didn't even catch his mistake.

Even The Washington Post threw a little shade at Trump, of course doing so in the subtlest way possible. In its own transcript's explanation of Trump's remarks, the Post wrote, "the White House corrected Trump's 'Nambia' reference to 'Namibia.' That is not what he said, so we have changed the transcript for accuracy."

Yeah, while the White House might try and erase Trump's mistake from history, there is still ample video evidence, and of course, some of the year's best tweets to remind us all of "Nambia" in all its glory.

And while Trump's gaffe may be pretty funny, it's also actually fairly troubling. Presidents are briefed extensively before they give speeches, and the fact that Trump couldn't manage to remember the precise names of just nine African countries is highly offensive.

Honestly, I'm just hoping that this whole "Nambia" incident doesn't make other countries look down on the United States even more than they already do. Although it wouldn't surprise me if they did. Whatever the case, just remember this one thing: Nambia, Narnia, and Genovia are not real places.