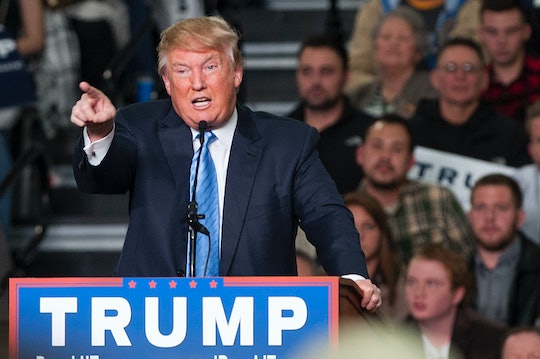 Donald Trump Out-Trumped Himself By Allegedly Mocking A Reporter's Disability

Just when you think that Donald Trump’s public commentary couldn’t possibly get any more outrageous or offensive, it does. At a rally in South Carolina Tuesday night, Trump allegedly mocked the physical disability of a journalist, the New York Times' Serge Kovaleski. Trump impersonated him while reading from an article he wrote for the Washington Post after 9/11 which referred to alleged police probes of Muslim celebrations in New Jersey in the wake of the terrorist attacks. Trump has claimed — to much debate — that he witnessed “thousands” of Muslims in New Jersey cheering the fall of the World Trade Center on 9/11, and although there was never any evidence of this actually happening, he referred to Kovaleski’s article as a way to back up his claims. No specifics were given in the piece, though, and the allegations have since been widely refuted by police and other New Jersey officials. In a recent interview with the Washington Post, Kovaleski said, "I certainly do not remember anyone saying that thousands or even hundreds of people were celebrating. That was not the case, as best as I can remember.”

Update: Trump denies that his comments were related to Kovaleski's disability, claiming that he doesn't know what the reporter looks like.

The original accusations began after Trump brought up what he considered to be Kovaleski’s backtracking at the South Carolina rally, calling out the reporter by using an exaggerated voice and arm movements that appeared to make fun of Kovaleski’s disability, arthrogryposis, which leaves him with limited use of his arms:

Even if, as Trump claims, he wasn't attempting to comment on the New York Times reporter's disability, it wouldn't have been the first time Trump has made offensive personal comments towards other people who have criticized him. There were the comments about Carly Fiorina’s face, and about Megyn Kelly having “blood coming out of everywhere.” And in July, Trump hit back at columnist Charles Krauthammer’s remark that Trump was “a rodeo clown” by saying, “I get called by a guy that can’t buy a pair of pants, I get called names?” Krauthammer is paralyzed from the waist down.

The New York Times fully supports Kovaleski, saying in a statement Wednesday, that “[we] think it's outrageous that [Trump] would ridicule the appearance of one of our reporters.” Kovaleski also commented on Trump’s remarks himself, saying “[the] sad part about it is, it didn’t in the slightest bit jar or surprise me that Donald Trump would do something this low-rent, given his track record.”

Some of Kovaleski’s colleagues have since taken to social media to offer their support and blasting Trump’s comments:

Other than Trump's tweets, his campaign has declined to officially comment, but according to the Washington Post, a Trump campaign official has reportedly said, that the GOP candidate was "not aware of any condition and was not mocking his physical appearance in any way." Romper reached out to the Trump campaign for comment Thursday but did not immediately hear back.