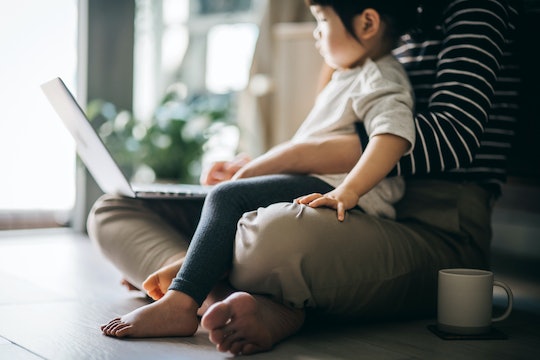 Remember a few weeks ago, when wildfires were immolating huge swaths of the West Coast — Seattle, Portland, and San Francisco choked with smoke — while Hurricane Sally churned ominously towards a collision with the Gulf Coast?

That’s basically the state of working mothers right now: Catastrophes on every side. Then on Tuesday, President Trump decided to spike negotiations on a stimulus bill that would have included tens of billions of dollars in child care relief. To extend the metaphor, Trump basically just blew up FEMA.

It hardly needs to be said that child care is currently a tremendous pain point for families. While the system wasn’t working back when corona was a beer and not a virus, the pandemic has shattered it. This is especially true for programs that serve young children, many of which have since converted to take in 5-year-olds being “redshirted” an extra year before Kindergarten, as well as older elementary children in need of a safe and supported virtual learning environment.

President Trump did not create the child care crisis, but when presented with a chance to help contain the fires and turn the hurricane out to sea, this President chose to throw a temper tantrum.

Because the U.S. offers meager public funding, child care programs operate more like restaurants than libraries or public schools, dependent on paying customers to keep the lights on. Already getting by on gossamer-thin budget margins, the simultaneous loss of enrollment and increase in health and safety costs these past six months have busted those budgets.

We’re seeing the inevitable consequences: Pennsylvania, in an archetype that applies across the nation, has already seen 260 licensed child care programs — nearly five percent of its supply — permanently close, despite help from now-exhausted federal CARES Act money. After a neighboring center closed, one center director told Spotlight PA, “I had phone calls just constantly, ‘Please, please, please, I need care for my child.’”

Meanwhile, among programs that have remained open, many have reluctantly raised tuition rates or reduced open days or hours in an attempt to stay afloat, further burdening parents.

We’re also seeing the other inevitable consequence: mothers being forced out of the workforce in staggering numbers because of child care challenges. Between August and September, 865,000 women dropped out of the workforce, quadruple the number of men; fully one in three millennial women who are currently unemployed report it is due to child care issues.

The most galling part is that it didn’t have to be this way.

There was bipartisan agreement about the need for major child care relief. The House Democrats were proposing roughly $50 billion in dedicated relief, while the Senate Republicans had $15 billion in their proposal. Considering the CARES Act had only $3.5 billion for child care, meeting in the middle would have been a tremendous step towards stabilizing an industry in freefall.

It didn’t have to be this way.

Instead, President Trump went and “kicked over the chess board,” in the words of one economist. Unless something radically changes, there will be no comprehensive relief bill before the November election (Trump’s pretzel knot of a half-reversal on recent negotiations with Congress does not mention child care, and previous small business aid was of little help to many child care programs). Which means that every time payroll, rent, and utility bills come due, more and more child care programs will shutter their doors.

The President and his enablers, also known as the Republican Party, own that now.

They own every toddler who is separated from a beloved educator, aching and confused by the sudden changes. They own every child care program serving its community for decades that disappeared, leaving behind a Craigslist ad for used mats and toys. They own every child care practitioner —disproportionately women of color already subsidizing the economy with their horridly underpaid labor — who must now seek a new source of income to feed their own families. They own the economic damage wrought by the degrading of an industry that produces nearly $100 billion in output while providing infrastructure support to nearly every other industry. And they own every parent who is panicked and scrambling for a spot for their children, every parent (almost always the mother) who joins the exodus of those kicked out of the workforce by a President’s intransigence.

President Trump did not create the child care crisis. America did that with bipartisan gusto, building a vulnerable system on the foundation of a long history of sexism and racism and underinvestment. But when presented with a chance to help contain the fires and turn the hurricane out to sea, this President chose to throw a temper tantrum.

Elliot Haspel is an early childhood policy expert and the author of Crawling Behind: America’s Childcare Crisis and How to Fix It.

More Like This
Michigan Right-Wing Group Wants To Erase LGBTQ+ Sex Ed
Teacher Shot By 6-Year-Old Student Told School He Had A Gun, Was Told To "Wait"
How To Help Families Affected By The Devastating Earthquake In Turkey & Syria
10 Great Podcasts That Will Keep Your Kids Entertained On Your Next Family Road Trip
What Parents Are Talking About — Delivered Straight To Your Inbox