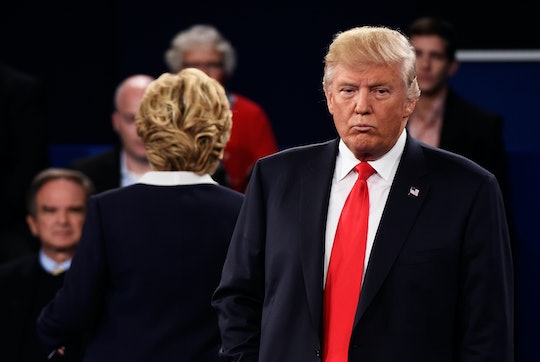 There are a lot of things for us to criticize about the second presidential debate. One of the main things to criticize is that the majority of the debate had nothing to do with the issues. Comments were centered around attacking the candidates, and that was pretty damn stressful. And what does one do when feeling stressed and anxious? Pace! These Donald Trump pacing tweets and memes from the debate prove that Trump's anxious walk got to just about everyone watching.

If you've ever had to wait to use the bathroom, or are about to scream "Surprise!" for someone's 30th birthday party, you probably recognized Donald Trump's pacing. The man seriously didn't sit down. And no, this isn't a point for his stamina. It's just a funny thing, you guys. He didn't sit down for almost the entirety of the debate and it was literally all of us who were anxiously working our way through something we, frankly, didn't want any part in. (Because, let's be honest, Trump probably didn't want to be at this debate on Sunday.)

Tweets and memes about Trump's pacing are just one more reason we need to get some of these Twitter users on a stand-up comedy stage. Seriously, if you worry about America while watching the second presidential debate, may these tweets allow you to laugh (until you cry when you realize this is where we're at in American politics).

At one point throughout the night, Trump leaned on the back of his chair for a little support. Can't blame the man. His standing throughout was potentially a planned thing — a "power move" that his team may or may not have planned.