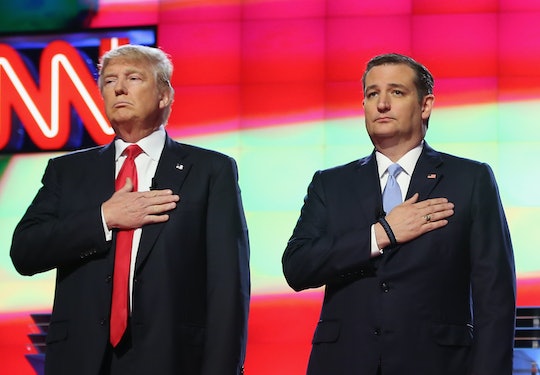 Just days after announcing Carly Fiorina as his vice president and his running mate for the 2016 election, Ted Cruz dropped out of the presidential race, according to his campaign manager Jeff Roe, and though it shouldn't be a surprise at all — Cruz's withdrawal is feels wholly shocking. After a disappointing loss in Indiana (a state he desperately needed to win if he wanted to continue his push forward toward the GOP nomination), the Cruz camp decided he'd bow out. And though John Kaisch has been in the race all along, in light of the Cruz news, all eyes are on The Donald now. We can expect Donald Trump's reaction to Ted Cruz dropping out to be loaded with his standard Trump gloat, and though he hasn't yet issued a statement on the Cruz leaving the race, we all know it's coming.

Most dubbed Cruz's VP pick a "desperation" move, a sure sign that the end was near and that the candidate was doing any and everything he could to draw in and excite potential voters. In an interview with Fox News' Greta Van Susteren, Trump said the Cruz/Fiorina ticket was nothing but a "waste of time":

Well, I think it's really a waste of time, honestly. Number one, it's very early. You're not supposed to be doing it this early.

The move, though incredibly premature, signaled to devout Cruz voters that the candidate saw (and believed in) the future for his campaign despite dwindling polling efforts, and picking up Fiorina as his VP was also an attempt to draw in women voters. Trump continued, "He got nothing and I think he wanted to do something to get out of that negative cycle, and in that sense it was probably good for him — but people will not like it."

Earlier Tuesday evening, after it was clear that Trump had swept in Indiana, the businessman unleashed several choice tweets detailing his sportsmanship:

Speaking from Trump Tower in New York City, Trump delivered the following comments on his victory in Indiana and Cruz's concession:

I have to tell you that I've competed all my life. All my life, I've been in competitions. Different competitions, whether it's sports or business, and now for 10 months, politics. And I have to tell you, I have met some of the most incredible competitors I've ever faced off with, right here in the Republican Party. And you have to understand, Ted Cruz is one hell of a competitor. I don't know if he likes me, but he is one hell of a tough, smart guy. And he has got an amazing future, so I want to congratulate Ted. I know how tough it is — it's tough. I've had some moments when it was not looking so good, so I know how it feels.

And there you have it.