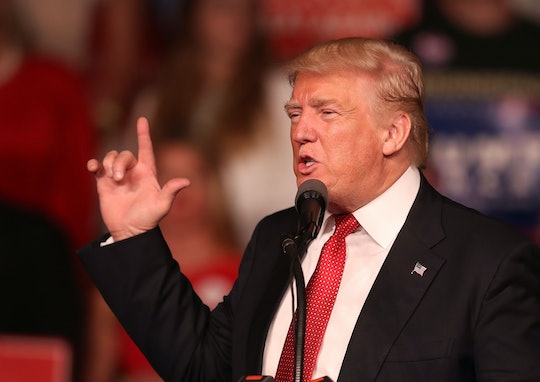 Republican nominee Donald Trump's presidential campaign could not possibly get any stranger than it already is. With that said, Donald Trump reading poetry is still the weirdest thing you'll see all week. Or maybe even ever. At a rally at Fort Worth on Monday afternoon, Trump set out to make a statement about the dangers of taking in refugees or immigrants by reciting the lyrics to "The Snake," a 1968 song by Al Wilson that was a mini radio hit in the U.K. around 1975. There are lots of things that are completely absurd about this little act of actual political theater, but apparently, Trump has been doing this at several of the rallies throughout his campaign.

The story in the poem is pretty straightforward: A woman finds a sick snake and it begs her to take it in. She does, she feeds him, she likes the snake. She gets home from work the next day and the snake is all better. She hugs the snake (you do not want to hear Trump say "bosom," trust me) and then it bites her. The woman is surprised but the snake says, "I saved you/cried the woman/And you've bitten me, but why?/You know your bite is poisonous and now I'm going to die/Oh shut up, silly woman/ said the reptile with a grin/You knew damn well I was a snake before you took me in.

Get it? Just like the immigrants and refugees will kill Americans.

Spare me, Trump. This is really funny for a second until you consider how grotesque it is. First, Trump talking about a woman tenderly holding a snake is just really creepy. Secondly, it's so racist and xenophobic that there's almost no point in getting angry. All Monday, Trump has been blaming the bombings in New Jersey and New York, as well as the stabbings in Minnesota, on America's "extremely open immigration system."

But radicalization is a tricky thing. The Minnesota attacker, Dahir Adan, had been living in the United States for 15 years. The New York bomber, Ahmad Khan Rahimi is a U.S. citizen, though he was born in Afghanistan. To compare human beings to a predatory, sneaky reptile that will kill anyone who shows it kindness — well, it's just totally off base.

The Republican nominee is being careless with Americans' safety when he hisses "The Snake" to his supporters, implying that Americans should be wary of newcomers because they are "poisonous."

It's a shame, because it's a good song. But it's not an immigration policy.