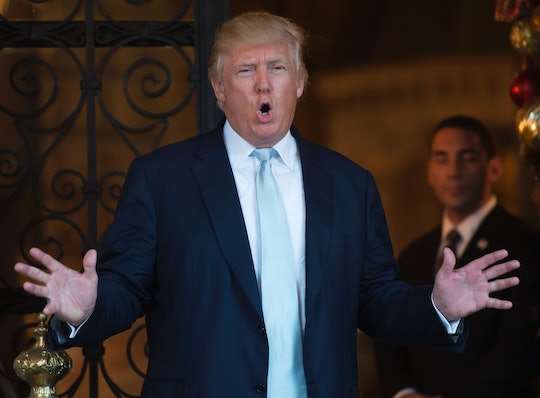 Donald Trump Refuses To Unite The US

The 2016 election gave rise to an America more deeply divided than it's been at perhaps any time in the last 150 years. True, brothers have yet to literally face off on the battlefield, but they're unfriending each other on Facebook and canceling holiday get-togethers. It's the responsibility of our elected leaders to bring us together again, but Donald Trump refuses to unite the U.S. With each hateful tweet he sends out, he's only driving the wedge deeper and deeper. Trump's transition team has not responded to Romper's request for comment regarding how he will unify the country after his seemingly divisive tweets.

Let me be clear; I'm not merely characterizing his tweets as hateful because I'm a sore loser. As of the time this was published, eight of his last 10 tweets were negative, and this certainly isn't a new trend. Meanwhile, I scrolled through President Barack Obama's feed all the way through mid-October (mind you, he tweets less in a month than Trump tweets in a day), and the most negative thing I could find was a link to a Washington Post article about climate change with a warning that "Denial is dangerous." Trump, meanwhile, is busy calling people "clowns" and taunting North Korea. His version of reaching across the aisle was to wish his "many enemies" a happy new year, all while his supporters spam his replies with ads for "liberal tears" coffee mugs.

Those who oppose Trump (and who he then openly disparages every chance he gets) aren't a small minority; either. The latest polls show that his favorability rating has been hovering in the 40s, and he won by one of the slimmest margins of all time. And, of course, this bears repeating, as often as is necessary until everyone has heard it and believes it: former Secretary of State Hillary Clinton won the popular vote. She won by nearly 3 million votes. Trump's win was not a landslide or a blowout by any stretch of the imagination. Out of 200,081,377 registered voters, only 62,979,879, or 31 percent, voted for Trump.

But rather than try to reassure those who oppose him that he's ready to be a "president for all Americans," as he promised in his victory speech, he repeatedly characterizes them as enemies. The New Year's Eve tweet was nothing new; he's been tweeting about his enemies for years. In 2010, Obama once casually used the word "enemies" to refer to those who politically oppose others, and then-House Minority Leader John Boehner was positively horrified, addressing the incident with a prepared speech in which he admonished, "Mr. President, there's a word for people who have the audacity to speak up in defense of freedom, the Constitution, and the values of limited government that made our country great. We don't call them 'enemies.' We call them 'patriots.'" I can't imagine Trump ever calling an opponent a "patriot," and that's deeply disturbing. The U.S. has been torn apart, and Trump seemingly has no plans to mend it.

Trump is eager to insult those who voted against him, the Democratic Party as a whole, individual private citizens, journalists, and foreign countries, just to name a few, but what's even more troubling is whom he won't speak out against. He still refuses to denounce Sandy Hook deniers. He claims he doesn't want to "energize" the alt-right, a code name for neo-Nazis and white supremacists, yet he's appointed one of their leaders as his chief strategist. And while the Southern Poverty Law Center has collected more than 1,000 reports of bias-related harassment and intimidation since the election, Trump downplayed the incidents to 60 Minutes' Lesley Stahl before offering a "Stop it" to his followers. Until Trump comes out with a clear, strong stance against hate – and stops doling it out himself in 140-character rants – the U.S. will continue to be divided. A nation cannot come together under a leader who tweets about the majority of the country being "haters" and "losers."