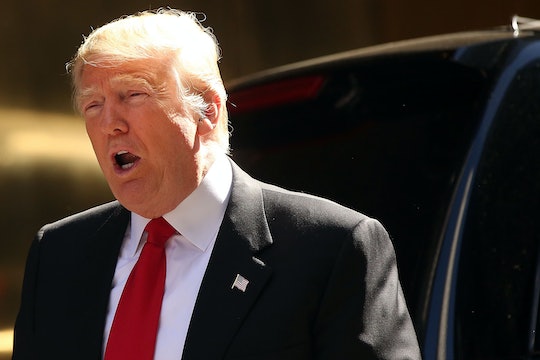 This week, GOP front-runner Donald Trump seemed to get back to his reality show roots by reorganizing his campaign staff in a big way. While no one has actually been fired just yet (Apprentice-style, at least), Trump just reportedly demoted his campaign manager and the internal shake up could either make or break his run for office. Corey Lewandowski has been Trump's campaign manager from the campaign's kick-off last June, but as of this weekend, his role has been reduced to that of what CBS News called "a body man and scheduler." At the same time, Trump has hired two professional political insiders, Paul Manafort and Rick Wiley, to lead his campaign efforts in upcoming primary states.

According to some reports, this is already causing some drama within the campaign. Trump's national field director, Stuart Jolly, resigned on Monday when he learned he would have to answer to Wiley in a professional capacity. There are also other Lewandowski "loyalists," according to CBS News, that are unhappy with the changes as well. Allegedly, many on the campaign team aren't thrilled with the front-runner's choice of Wiley, who was hired after running Wisconsin Gov. Scott Walker's failed presidential bid last summer, and feel that Trump has let some loyal colleagues and supporters down in the name of delegate gathering.

A longtime campaign operative told Politico this week that there was no way Jolly and Wiley would have been able to work with each other. Just to add to the melodrama, the same sources also told Politico that there were many who didn't like Jolly to begin with and were glad that he had resigned under the new structure. It's almost like being in the high school cafeteria all over again.

In fact, it likely would be just like high school, except that all of these shake ups show Trump is acting a lot more strategically than your average mean girl eyeing the prom crown. Feeling the pressure in the lead up to the convention, Trump allegedly hired Wiley and Manafort to help him wrangle delegates before hitting Cleveland in July. He's also given the duo $20 million to spend on ads in upcoming primary states to ensure big wins.

Lewandowksi and the Jolly crew were able to help Trump get off of the ground and running early on, but now's the time for serious business, if you read between the lines of the reorganization efforts. A Trump campaign operative told Politico in the same interview that despite the alleged infighting, Lewandowski and Jolly deserve a "lot of credit" for "getting this far with no money.”

Officially though, Trump's spokespeople spent the better of Tuesday explaining to news organizations that Jolly's resignation doesn't signify any bad blood within the organization. Even Jolly told CNN that it was simply time for him to move on. "You gotta love and respect the people you work for. Things were changing so I'm going to give them an opportunity," he said. Jolly wrote in his resignation letter, according to The New York Times, that directing the campaign was an experience he won't forget anytime soon. "The primary wins in New Hampshire & South Carolina were magical and I will never forget them,” he wrote. “The other 20 wins were nice, but nothing beats those first two victories."

Sometimes people just grow out of their relationships, whether it's a high school clique or a presidential campaign team. As far as Donald Trump is concerned, it doesn't look like he's burned any bridges just yet, as long as the staffing changes pay off in the long run.