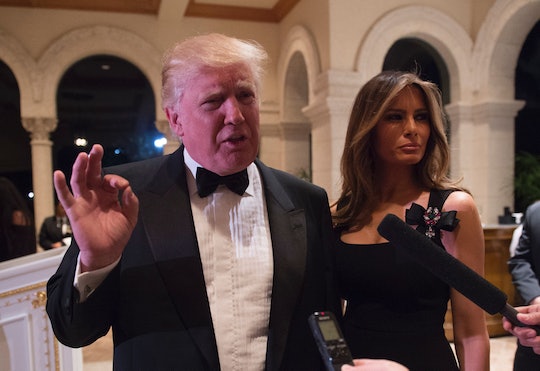 At this point, it's pretty safe to assume that anyone who dares to criticize President-elect Donald Trump can expect to become the target of one of his Twitter rants. So when Meryl Streep chose to call out the soon-to-be POTUS in a speech during her Cecil B. Demille Award acceptance speech at the Golden Globes award ceremony Sunday, it's likely she was already expecting his 140-character retaliation. Unsurprisingly, Donald Trump responded to Meryl Streep's speech about him, and, well, it's exactly what you'd expect it to be.

In her incredible, total mic drop of a speech, Streep took aim at one of Trump's 2015 speeches, during which time he appeared to be mocking the disability of reporter Serge F. Kovaleski, according to ABC News. Streep told the crowd that, of all the performances that year that really left an impression, it was actually Trump's — and not a work of Hollywood fiction — that affected her the most:

There was one performance this year that stunned me — it sank its hooks in my heart. Not because it was good; there was nothing good about it. But it was effective and it did its job. It made its intended audience laugh, and show their teeth.

It was that moment when the person asking to sit in the most respected seat in our country imitated a disabled reporter. It kind of broke my heart when I saw it, and I still can’t get it out of my head, because it wasn’t in a movie. It was real life.

Although Streep never mentioned Trump by name, it was more than clear who she was referring to. And while Trump himself told The New York Times Monday that he hadn't actually watched the Golden Globes or Streep's speech, he said he was “not surprised” that “liberal movie people” like Streep had opted to speak negatively of him during the broadcast.

In his tweets, published early Monday, Trump called Streep "one of the most over-rated actresses in Hollywood," and a "Hillary flunky." He also wrote that he didn't "mock" Kovaleski's disability, but was trying to make a point about him being dishonest.

According to The Washington Post, as her speech continued, Streep spoke of the danger of comments like Trump's, not just because they might be hurtful or wrong, but because they have a very real effect on those who are watching him say them. Streep said,

And this instinct to humiliate, when it’s modeled by someone in the public platform, by someone powerful, it filters down into everybody’s life, because it kind of gives permission for other people to do the same thing.

Disrespect invites disrespect. Violence incites violence. And when the powerful use their position to bully others, we all lose.

Streep also emphasized the importance of protecting journalists under a Trump presidency, and encouraged the audience to take that seriously:

This brings me to the press. We need the principled press to hold power to account, to call them on the carpet for every outrage. That’s why our founders enshrined the press and its freedoms in our Constitution. So I only ask the famously well-heeled Hollywood foreign press and all of us in our community, to join me in supporting the Committee to Protect Journalists, because we’re going to need them going forward, and they’ll need us to safeguard the truth.

Of course, Trump's claim that Streep is an over-rated actress seems almost laughable: aside from being a prolific and immensely talented actress who has been in Hollywood for almost 40 years now, The Washington Post noted that Streep has earned 30 Golden Globe award nominations, as well as 19 Academy Award nominations, which is more than any other actor. In 2014, she also received the Presidential Medal of Freedom, and is regularly cited by other actors as someone who they admire.

But, as far as Trump is concerned, Streep's strong support of former Secretary of State Hillary Clinton is really what's behind her comments. He told The New York Times,

People keep saying I intended to mock the reporter’s disability, as if Meryl Streep and others could read my mind, and I did no such thing. And remember, Meryl Streep introduced Hillary Clinton at her convention, and a lot of these people supported Hillary.

Trump isn't the only one who isn't happy with Streep today though. During an appearance on Fox And Friends Monday, according to The Washington Post, Trump's senior adviser (and former campaign manager) Kellyanne Conway said, “I’m concerned that somebody with a platform like Meryl Streep is also, I think, inciting people’s worst instincts.”