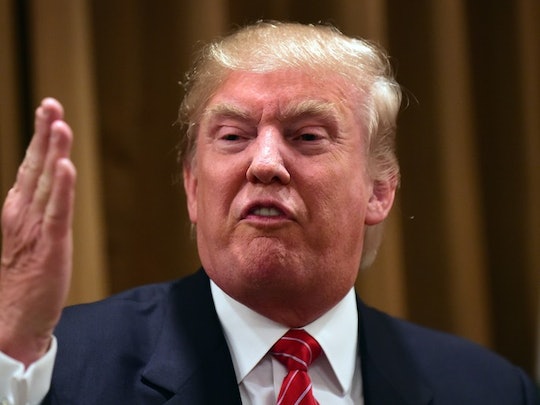 In a move that shocked precisely nobody on Thursday morning, former reality show host and Republican presidential hopeful Donald Trump called Megyn Kelly a bimbo via a retweet that was making fun of her GQ cover photos, according to The Hill. The meme contained two barely-racy images from a photo shoot that accompanied her 2010 interview with GQ, and was captioned, "Criticizes Trump for objectifying women. Poses like this in GQ magazine.” Twitter user @gene70 captioned the tweet, "And this is the bimbo that's asking presidential questions?" Trump retweeted the tweet.

Kelly found herself in Trump's cross hairs after the first Republican debate, which she moderated. Trump felt that Kelly was too hard on him for pointing out that he's called women "fat pigs," "dogs," "slobs" and "disgusting animals," according to the Washington Post, and also has a history of making crude jokes at the expense of women. She also called him out for flip-flopping, citing that he's identified as a Democrat as recently as 2004, and that he'd initially supported abortion rights and a ban on assault weapons. Trump responded to the perceived slights by tweeting that Kelly "bombed" at the debate, and later telling CNN's Don Lemon that Kelly had "blood coming out of her wherever," which many believed was a reference to menstruation. Trump has insisted that by "wherever," he meant "nose," and that it's a totally normal colloquialism that everyone should understand. Sure.

Trump continued to make disparaging comments about Kelly both on Twitter and in interviews following the debate, calling her unfair and unprofessional. Oh, and also calling her a bimbo (which is super professional).

Kelly refused to engage with Trump, but Fox News chief executive Roger Ailes released a statement backing her up. Trump then turned his ire towards Fox News as a whole, announcing on Sep. 23 that he was boycotting all Fox News programs, according to the Washington Post. Six days later, he gave up and appeared on The O'Reilly Factor.

Kelly will be moderating Thursday night's Republican debate, the last one before Monday's Iowa caucus. Fox News released a statement alleging that Trump’s campaign manager, Corey Lewandowski, made threatening statements about Kelly to try to get the network to replace her as debate moderator: "In a call on Saturday with a Fox News executive, Lewandowski stated that Megyn had a ‘rough couple of days after that last debate’ and he ‘would hate to have her go through that again.’ Lewandowski was warned not to level any more threats, but he continued to do so. We can’t give in to terrorizations toward any of our employees.” On Tuesday, Trump announced that he would not participate in the debate. Kelly, as usual, has no comment.