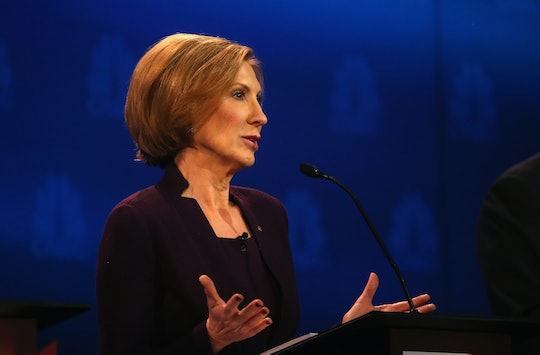 Things got a little ugly during the Fox Business/Wall Street Journal GOP debate. When Carly Fiorina attempted to participate in the debate and voice her opinion (you know, as presidential candidates do) Trump criticized Carly Fiorina for interrupting, throwing what can only be described as a toddler's temper tantrum:"Why does she get to keep interrupting everybody?" Well, she has a name, Donald. It's Carly Fiorina. Mrs. Fiorina to you.

And "she" is no stranger to unfair, sexist criticism during these GOP Debates. CNN's Michael Smerconish complained that Carly didn't "smile enough" during a debate earlier this year. (In case you're keeping tabs, he ignored the facial expressions of the other candidates.) Tonight's comments also aren't a first from Trump. The business mogul has criticized Fiorina's looks in the past, telling Rolling Stone readers to "look at that face" as a way to judge her leadership abilities. Because everyone knows being conventionally attractive is a pivotal and important presidential characteristic.

The audience in Wisconsin picked up on his sexist reaction to not getting his way, boo-ing Donald Trump almost instantly. So did the Internet. Twitter reactions were instantaneous, and people were more than willing to voice their disapproval of Donald Trump's inappropriate and disrespectful behavior.

First, the notorious moment became a Vine, because this is 2015 and you can't take your words back.

Then came the breakdown of exactly what just happened, because it was semi-surreal yet (sadly) not all that surprising to hear a man attempt to scold a woman like he was "tattling" on her.

It would almost be nice to feel shocked or aghast that this moment happened. Instead, considering the people onstage and their rhetorical treatment of women in the past, the predictability of this moment is, frankly, the most depressing part of the whole thing. Keep interrupting, Carly. Maybe if it happens over and over, it'll stop feeling shocking to those dudes.