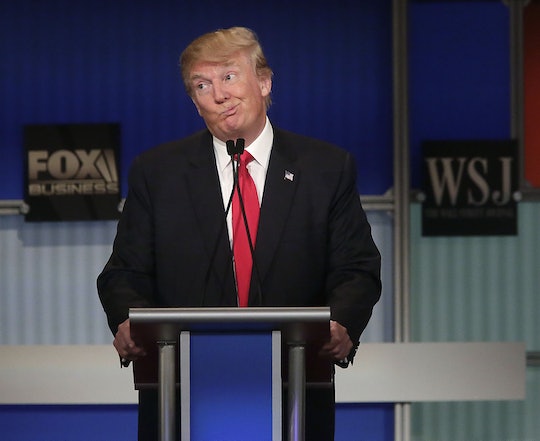 If there's one thing you can say about Carly Fiorina, it's that she's definitely held her own during the Republican primaries and debates, even though she’s often been overshadowed by the other candidates. But tonight, Donald Trump called Fiorina out for “always interrupting” — and women noticed. He even referred to her merely as "she" instead of using her name. Fortunately (for the sake of my faith in humanity), some members of the audience jeered at comment; It was clearly brusque and dismissive.

In some ways, this wasn't too shocking. Trump often disregards women in a very coded, sexist way. It's almost his ~thing~. But women were there at the debate tonight. They want to support their party. And yet they noticed Trump was being rude. It is very clear that the Republican party wants to “win this election.” Marco Rubio’s new super PAC ad even said they wanted any Republican to win. Over and over in closing statements, the candidates echoed the sentiment that the GOP must get into the Oval Office. But even in polls, it’s clear that the Republican party has a long way to go with winning over female voters. A poll from 2014 showed that females tend to vote for Democrats because they “want to make healthcare more affordable,” and are “tolerant of other people’s lifestlyes.”

It almost isn’t about whether you like the politics of the female candidates. Every time Donald Trump talks over a woman like they don’t matter, women across the country get that creepy crawly feeling. It’s not a good way to play, sir — especially if Republicans really want to get into that White House.