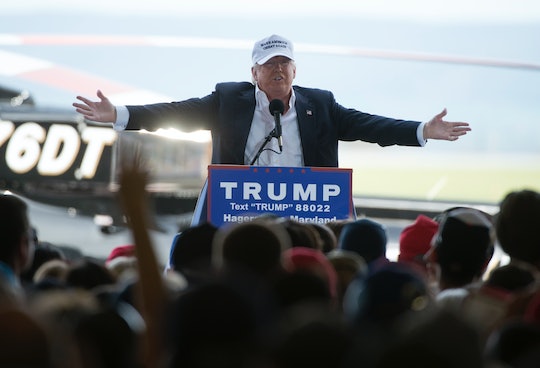 I can't imagine that anyone would be surprised to learn that Donald Trump was a totally hands-off father to his kids. I mean, can you really imagine him singing lullabies or warming up a bottle at 2 a.m.? He's even been upfront in interviews in the past where he's admitted that he's never changed a diaper for any of his five children, choosing instead to just support his kids financially. I suppose, if you wanted to give him the benefit of the doubt (I don't, but bear with me), you could make an argument about old-school gender roles and Trump being from a "different generation," and maybe that wouldn't seem too terrible (even though I still think it's terrible). But according to audio posted by BuzzFeed from a number of different interviews Trump has done, it's pretty clear that it's not just that he finds diapers gross (who doesn't?), but that he thinks that, as a man, he's better than that. In fact, Donald Trump says changing diapers is women's work, because apparently, no man would ever voluntarily want to care for their own child.

In addition to being completely offensive to both women and pretty much all men who are involved dads, it's offensive to any child without a father who likely would prefer that their father had been around to do things like change diapers. But, perhaps, more than anything, it's also further proof that the Republican frontrunner thinks incredibly poorly of anyone who isn't, well, himself.

Donald Trump isn't ever one to mince words, so, according to BuzzFeed, when he was asked back in 2005 during a radio interview whether or not he changes diapers (his wife, Melania, was pregnant at the time), his answer was straight to the point: "No, I don't do that." Even though the idea of not doing diapers seems kind of ridiculous, Trump's a rich man, and I can't exactly say that I wouldn't also take advantage of perhaps hiring someone to help with diaper changes and vomit explosions if I had more money than I knew what to do with. But then he explained that his aversion to diapers wasn't merely about the gross-factor — it was about maintaining his masculinity:

There’s a lot of women out there that demand that the husband act like the wife and you know there’s a lot of husbands that listen to that. So you know, they go for it.

Trump also said that he received some push back from his second wife, Marla Maples, after he refused to take their daughter, Tiffany, out for a walk:

Well, Marla used to say, ‘I can’t believe you’re not walking Tiffany down the street,’ you know in a carriage. Right, I’m gonna be walking down Fifth Avenue with a baby in a carriage. It just didn’t work.

As the daughter of someone who is a Trump supporter — and as someone who's also read plenty of pro-Trump comments on articles about his beliefs — I'm certain there are lots of people out there who don't entirely have a problem with this perspective. It's traditional, it's how it always used to be ("your grandfather never changed a diaper either, Alana"), and in the good old days, "men were men" (whatever that means). But, of course, there are almost an infinite number of things wrong with that perspective.

Firstly, there's nothing inherently feminine about childcare or parenting. In fact, studies have shown that involved fathers have a huge effect on their children's well-being. According to the Telegraph, children who are read to by their fathers have improved literacy skills, not just compared to children who aren't read to at all, but also by children who are read to by their own mothers. And, according to Yahoo!, children whose dads are involved in their day-to-day care routines — like bath time — are more likely to be "socially competent." Dads who hold their babies skin-to-skin are more likely to have happier babies who cry less and sleep easier, and the fathers themselves are likely to experience less aggression, and better relationship satisfaction with their wives. So, according to science, it seems that both children and men have a lot to gain when parenting is more than just something that women can do.

But, as Trump has noted, in his life, he doesn't need to be involved, because he has a wife and nannies to do that kind of stuff. In other words, why slog through parenting if you're rich and powerful? That might be a good question to ask Facebook founder/new dad Mark Zuckerberg, who is a hugely hands-on father to his infant daughter despite being substantially richer than Trump is. As Vanity Fair noted, Zuckerberg has become an eager Facebook parenting-oversharer along with the rest of the world, showing off sweet moments with his daughter Max, like taking her for a swim, bringing her to the pediatrician, and — you guessed it — changing her diaper. Of course Zuckerberg and his wife, Dr. Priscilla Chan, could easily afford to outsource this stuff, but they still do it anyway. And it doesn't look like his business is suffering because of it at all.

So maybe it's just time to call Donald Trump's comments what they really are: misogynist. He not only believes that men shouldn't be involved as parents beyond supporting his children financially, but he thinks that any dad who is involved is only doing it because he has the "type of wife" who is "demanding" that he do so (the 9 in 10 dads who change their children's diapers and consider themselves good fathers, according to Fox News, would probably disagree).

The good news, at least (when you ignore the fact that Trump could very well run the entire country) is that fewer and fewer fathers seem to agree with him about what a man's role is when it comes to parenting. Not only do most men today report wanting to become fathers, according to USA Today, they also want to be just as involved as their partners. And, while Trump may disagree, it's pretty safe to say that their children are going to be so much better off because of it.

More Like This
What You Need To Know Before Talking To Your Kids About Gun Violence
Take An Exclusive Look At A Brand New, Four-Part Peppa Pig Special
New Parents Google Around 6 Baby Questions A Day, New Survey Says
All The Fun Stuff For Kids & Families Coming To Netflix In June 2022