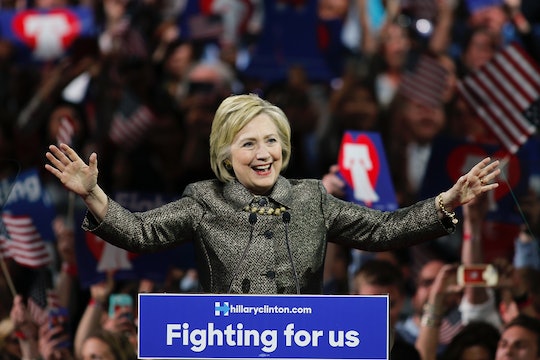 Donald Trump Says Clinton Is Playing The “Woman Card,” & Her Response Is Perfect

During a victory speech for his five-state primary sweep on Tuesday night, twice-divorced beauty pageant mogul Donald Trump attacked his opponent, former Secretary of State Hillary Clinton, in a predictable, gendered fashion. Trump said Clinton is playing "the woman card," a card that he fails to note is worth only 78 percent as much as a man card. "If Hillary Clinton were a man, I don't think she'd get five percent of the vote. The only thing she's got going is the woman's card. And the beautiful thing is women don't like her, OK?" Oh, really? Please tell me more about what I, a woman, like and don't like. Do I like the threat of being punished for having an abortion? That sounds like something that I wouldn't enjoy, but as a man, of course, you know best.

This is not the first time Trump's brought up Clinton's "woman card," and she addressed it at her own primary rally: "If fighting for women's health care, and paid family leave, and equal pay is playing the woman card, then deal me in!" What Trump fails to realize is that women voters aren't looking for a president they can swap outfits with — but someone who cares about issues that affect them. And if that's playing the "woman card," then maybe he should try it out. Maybe that's why 70 percent of women can't stand him.

While Trump's main concerns seem to be keeping Mexicans and Muslims out of America and sticking it to China, Clinton is actually listening to Americans about their concerns — and perhaps because she's been blessed with that oh-so-valuable woman card, she's happened to notice that half of U.S. citizens are women, and have "womanly" concerns, namely that they want to be safe, get paid, and maybe get an education without starving.

But maybe my partisan mind is too clouded to recognize the concerns of the average Republican woman. Let's see what Mary Pat Christie thinks of Trump's remarks. As the wife of New Jersey Governor and Trump champion Chris Christie, surely she's on board with this "woman card" nonsense? She's standing behind Trump in the pink in the below Vine.

Wow, wow, that family is just amazing. After this and her husband's performance behind Trump during his Super Tuesday speech, I'm officially calling for at least one Christie to stand behind Trump everywhere he goes for the rest of his life. It's the only way I can stand to listen to him for more than five seconds at a stretch.

When even the women on his team can't pretend to like him for more than a few minutes, it makes one wonder, has Trump ever spoken to a woman who wasn't on his payroll? Does he know what goes on inside women's pretty little heads while he's busy "cherishing" them? Does he really think that they're so petty and simple that the only reason any of them would cast a vote for Clinton instead of him is because she can sympathize when they've got cramps? Because a candidate doesn't have to be a woman to get women's votes. All I — and plenty of other women — ask is that they not actively hate us. Apparently that's too much to ask.