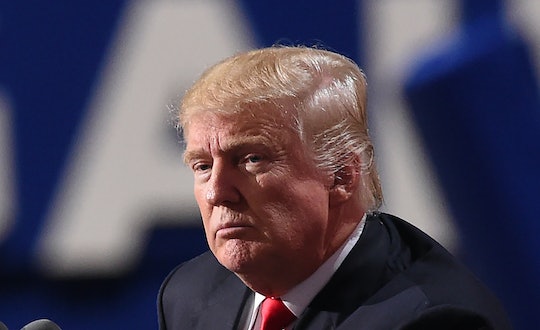 Republican presidential candidate Donald Trump spoke at a charter school in Cleveland on Thursday and delivered remarks to a small group of Ohio voters and members of the press. The event took place at the Cleveland Arts and Social Sciences Academy and one topic he was slated to touch on (but seemingly hesitated on for a good portion of his address) was his education policy. To no one's surprise — as he's said it before — Trump controversially stated that Common Core doesn’t work and called it a “total disaster.” The billionaire businessman’s plans for education policy instead, he claimed, would involve lots of budget cuts with a major emphasis on “local education.”

Trump has vowed to abolish many current standards by the Department of Education, including Common Core, and reaffirmed this position again on Thursday when he unveiled a $20 billion school voucher plan this week.

Trump’s education plan would involve redirecting existing federal funds as a "block grant" for 11 million children in poverty. This is intended to encourage states to allow students to choose where to enroll, either a private, charter, magnet, or public school. He also endorsed merit pay for teachers, as opposed to the seniority-based tenure pay structures that are typically favored by teachers unions.

"There’s no failed policy more in need of urgent change than our government-run education monopoly," Trump said on Thursday. He continued:

I want every singer inner city child in America who is today trapped in a failing school to have the freedom, the civil right to attend the school of their choice. Their parents will choose the finest school. They will attend that school. This includes private schools, traditional public schools, magnet schools, and charter schools, which must be included in any definition of school choice. Our government spends more that enough money to easily pay for this initiative with billions and billions to be left over. It's simple a matter of putting students first, not the education bureaucracy and that's what's happened.

Each presidential candidate's stance on education policy and reform are especially important to parents, and Trump's plan to promise to solve the country's education problems by leaving it to the state level leads to another batch of issues to tackle.

But, Trump's opposition to Common Core — a set of clear, consistent guidelines for what every student should know and be able to do in math and English language arts from kindergarten through 12th grade, meant to prepare them for college and careers — and his plans to redirect the educational standards to a state level would ultimately likely shift the larger system in favor of wealthy regions over impoverished, compounding the problem further.

Education improvement is not a fast and easy problem to fix and while Trump's proposed plans of action purportedly would boost academic standards and accessibility for disadvantaged students in America may sound a bit fantastical, it's probably because there are still many other factors that need to be addressed before significant change can happen.