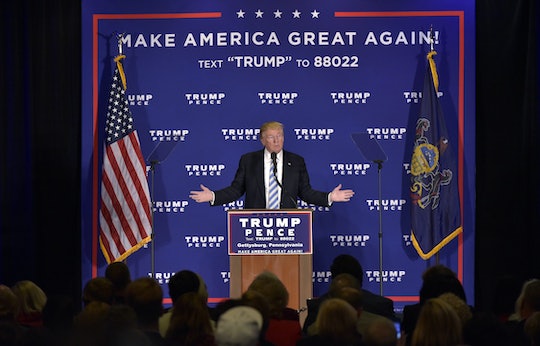 On Saturday, Republican nominee Donald Trump gave a speech in Gettysburg, PA to outline his plan for his first 100 days as president. But what was billed as his "closing argument" to voters before Election Day started off with Donald Trump promising to sue his accusers after the election. Trump is known to threaten legal action and not follow through with it. In the past he has threatened to sue The New York Times for breaking the first story of sexual assault and for revealing his tax returns, Ted Cruz for a smear ad, Univision, and a slew of celebrities. He's even vowed to jail his opponent, Hillary Clinton, when he is in office. So how serious he is about bringing suits to the 10 women who have accused him of sexual assault is up for debate.

Trump said, "Every woman lied when they came forward to hurt my campaign. Total fabrication. The events never happened. Never. All of these liars will be sued after the election is over." He added that it was media's fault for giving the women "wall to wall coverage" and not fact checking their stories. He also insinuated that he would go after the Clinton campaign for putting the women forward. There's no evidence that the Clinton campaign had anything to do with the allegations.

Trump said, "It was probably the Democratic National Committee and Hillary's campaign who put forward these liars with their fabricated stories. But we'll probably find out later through litigation, which we're so looking forward to." Trump is dedicated to preserving his image before the election. apparently convinced that all of the women are lying.

In reality, some of the women's stories have been corroborated. Six people have confirmed Natasha Stoynoff's story. The People reporter alleges that Trump kissed her and suggested they have an affair while she was covering his relationship with Melania. The New York Times also stands by its reporting and its lawyers slammed Trump's attempt at a libel claim, since Trump's reputation has been built, by Trump, on boasting about his sexual prowess. Trump would have to figure out what he wants to sue the women for. Other women have had friends back up their stories as well.

What's very scary about Trump's promise to sue, aside from whether the women's stories are true or not, is that this is exactly why women don't report sexual assault and harassment. Everything about the Trump allegations and his response sums up rape culture. Years ago, the women didn't report the incidents because they were so minor — a grope, a kiss, a lewd comment — and almost normalized. And when they did come out, there has been nothing but victim blaming and threats of legal action from Trump.

It's easy to see why women would rather deal with an unwanted kiss on their own instead of reporting it and holding their assailant responsible.