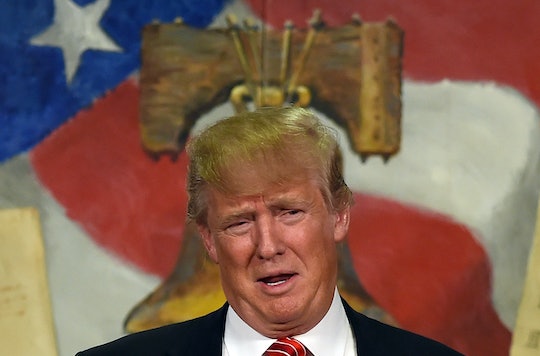 On Sunday, 49 clubgoers were gunned down and killed at the Pulse nightclub in Orlando, Florida; the perpetrator, 29-year-old Omar Mateen, was shot and killed by law enforcement after a three-hour siege around the LGBT nightclub early Sunday morning. As the nation reeled a day later from its deadliest mass shooting in American history, the presumptive GOP nominee has thrown his own opinion into the fray: Donald Trump says Orlando wouldn't have happened if clubgoers had guns. Speaking to CNN on Monday morning, Trump said:

If you had some guns in that club the night that this took place, if you had guns on the other side, you wouldn't have had the tragedy that you had. If people in that room had guns, with the bullets flying in the opposite direction right at him, right at his head, you wouldn't have had the same tragedy that you ended up having.

The tired, hackneyed response trotted out by gun rights advocates — if the victims only had guns to defend themselves, these mass shootings could have been prevented — is wrong. Just really, really wrong. And yet, it's a response that Trump has made before, in the wake of both November's terrorist attacks in Paris and the San Bernardino, California, shooting in December.

In 2012, Mother Jones took a deep dive examining the "good guys with guns" trope, looking at 62 mass shootings in the last 30 years in America, and they came to a startling conclusion: "In not a single case [of mass shootings] was the killing stopped by a civilian using a gun." In the almost four years since the Mother Jones piece was published, that statistic remains unchanged.

Despite this, gun rights advocates often cite the 1993 National Self-Defense Survey, conducted by two Florida State University criminologists. They extrapolated an estimate of defensive gun uses that occur each year — between 1 million and 2.5 million defensive gun uses — based on approximately 5,000 anonymous phone interviews. The NSDS has since been hotly debated between gun rights and gun control advocates. But, even when armed civilians could defend themselves or others, it doesn't always work out that way.

In 2011, Joe Zamudio, a civilian with a gun, intervened in the assassination attempt on Sen. Gabby Giffords in Tuscon, Arizona. By his own admission, Zamudio was "a matter of seconds, two, maybe three seconds" away from accidentally shooting a bystander he mistook for the actual shooter, Jared Lee Loughner. In a 2005 mall shooting in Tacoma, Washington, an armed civilian with a concealed-carry permit was shot and nearly killed when he fired at the perpetrator; the shooter would go on to wound six more people before surrendering to police.

In October last year, during the Umpqua Community College shooting, an armed student near the incident wasn't able to stop shooter Christopher Harper-Mercer, who killed nine people before turning the gun on himself. After the shooting, Trump simply said "These things happen."

I guess it's easier for Trump to justify his call for armed Americans when the shooter is Muslim — and not a 26-year-old white guy like the Umpqua shooter. While the Orlando shooter's religion just happens to fall in line with Trump's anti-Muslim rhetoric, it still doesn't change the fact that "more guns" wouldn't have prevented Sunday's tragedy. And "more guns" will do nothing now to help the 49 dead victims and their grieving families.