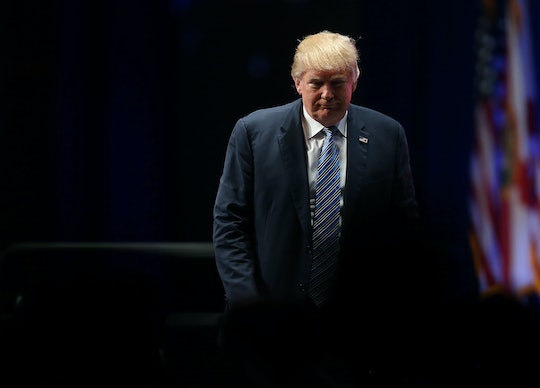 There are lots of varying reactions floating around the Twitterverse today from just about everyone about last night’s attacks in Paris — from messages of support to thoughts on how it could have been prevented. Among those many voices came, of course, several tweets from Donald Trump, who reiterated in one post how no one took him seriously when he said he wanted to "bomb the hell" out of ISIS. But today, while speaking at an event in Beaumont, Texas, the candidate went one step further: Trump said that the Paris victims should have had guns — if they had, everything would have gone “much, much differently.”

Oh man — I read that the first time and thought, here we go again. Right? Trump's latest thoughts came while speaking at a rally Texas, where he had a lot to say about the situation in Paris — most of which criticized President Obama and his foreign policies. Trump also reiterated his position that we would be “insane” to accept any Syrian refugees into the country. (Currently, the Obama administration is looking to increase the number of Syrian refugees that will be allowed to enter the U.S. and intending to set up screening centers before they do so.)

Aside from his Texas comments, Trump has been tweeting up a storm about Obama and Paris all morning. No matter what you think about gun control, saying that the victims should have been armed in able to defend themselves sounds a little inflammatory the morning after the attacks. It's also further evidence as to why Trump is starting to sound a little more absurd every day. Following this week’s rant about Ben Carson and a pretty so-so showing at the Republican debate on Tuesday, it seems that Trump is starting to lose steam. And supporters. At the rally he spoke at today, turn-out really wasn’t what it had been. That might be a sign that supporters were either just sleeping in on a weekend, or people are starting to be wary of all the things he says. Just look:

The bottom line? There are lots of ways to stand with Paris right now. But talking about the lack of guns and “if only” scenarios is probably not one of them.