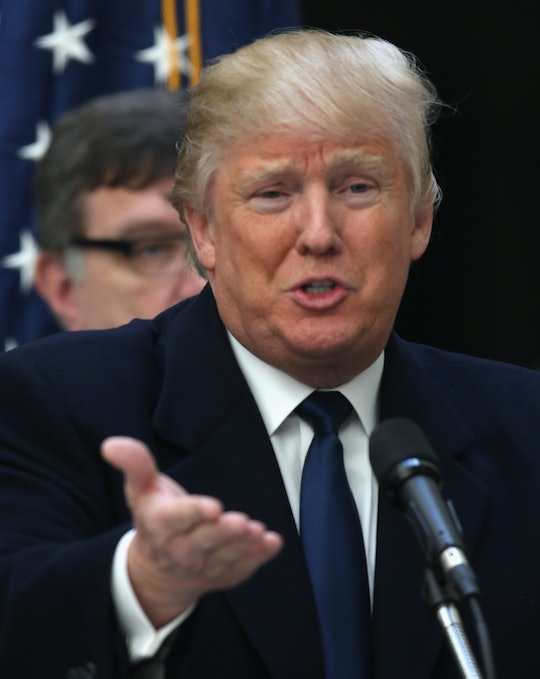 Republican presidential candidate Donald Trump seems to think it's okay to say just about anything about women and not pay the political price for it. Just this week, in fact, Trump said his previous sexist comments were a joke. Yes, just a joke.

That presumably includes his comment in 2004 that victories by women on The Apprentice, the reality TV show that Trump hosted, were, "to a very large extent, dependent on their sex appeal." Or his comment in 2013 that women in the military should more or less expect to be sexually assaulted, 'cause you know, that's just how things are. “What did these geniuses expect when they put men & women together?” Trump tweeted at the time.

Yes, these comments and more can be swept under the rug and forgotten forever, because Trump said in a phone interview with a Wisconsin television station this week that he was just joshing around. "I’m no different than anybody else, and people joke and I joke,” Trump said. “And I never knew I was going to be running for office."

Well, that's a huge relief. Not only does Trump regret his comments only insofar as they affect his political campaign, but c'mon, "everyone" jokes! In Trump's eyes, it seems, his jokes are no less offensive than anybody else's. (Makes you wonder what kind of company he keeps, no?) ‌

“All of a sudden you decide because the country’s doing so badly that you’re going to run for office, and then they take every single thing that you’ve ever said over a lifetime,” Trump explained in the interview. While it's difficult to parse the lack of logic here, it appears that Trump's defense goes something like this: Anything he said in the past should be forgiven by simple virtue of the fact that we're analyzing it at all. I mean, really, why should voters care about what a candidate has said? Words don't mean anything, right?

According to this logic, voters probably shouldn't pay any attention to Trump's 2005 remarks to radio host Howard Stern about the responsibilities of raising children. When Stern asked if Trump planned to have more kids, Trump said yes, because it's no skin off his back anyway.

“I mean, I won’t do anything to take care of them. I’ll supply funds and she’ll take care of the kids," Trump said, referencing his third and current wife, former fashion model Melania Trump. "It’s not like I’m gonna be walking the kids down Central Park," he added. (Because, really, what kind of father takes their kids to the park?)

Now, to potential voters who might take this remark as evidence of Trump's stance toward fatherhood, or his potential attitude toward important economic policy issues like parental leave and flextime—fear not! Don't get your knickers in a twist, because Trump was just joking.

Trump's sudden interest in defending his track record with women has, interestingly, come at the same time as a new CNN poll showing that 73 percent of registered women voters have an "unfavorable" view of Trump. Ouch. Looks like Trump's thirst for power is enough to make him kinda-sorta backtrack on saying things like "a person who is flat-chested is very hard to be a 10."

The poll numbers are not, however, enough to tamp Trump's vindictiveness against individual women. He went out of his way to clarify that his comments about Fox News anchor Megyn Kelly weren't jokes. "I didn’t say that in jest at all. I said that 100 percent because Megyn Kelly never treated me fairly and everybody knows it," Trump said.

While Trump's "jokes" about women are an unfortunate testament to a man raised in a patriarchal society, his inability to deal with women in power just might be America's meal ticket out of a Trump presidency. As New Republic editor Jeet Heer wisely pointed out in a recent article,

Trump’s self-assurance deserts him completely when confronted with a female adversary... which bodes well, of course, for his likely general-election opponent, Hillary Clinton, whose formidable and unflappable character make her exactly the sort of woman that Trump has the hardest time reacting to.

So joke on, Trump. Joke on.

More Like This
13 Moving Photos Of Kids, Families, & More Protesting Abortion Rights Across The Country
Bridgerton Season 3 Will Focus On Fan Favorites Penelope & Colin
MGK Shared An Emotional Tweet After Dedicating Song To “Wife” & “Unborn Child”
Diddy's Kids Are All Grown Up & Showed Up In Style To Support Their Dad