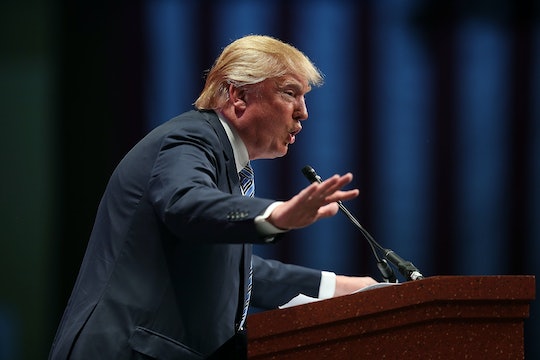 Donald Trump Says Shutting Down Radicalized Mosques in The U.S. Would Be Something He'd "Strongly Consider"

As the tragic events in Paris continue to weigh on everyone's mind, world leaders — and even some prospective world leaders — have been sharing their two cents as to how exactly the U.S. should be responding, how we should be combatting ISIS, and what our next steps are. And of course, there's one GOP candidate who's certainly not holding back: During a phone interview on MSNBC's Morning Joe Monday, Donald Trump said he'd "strongly consider" shutting down mosques tied to radical Muslim ideologies. Trump's response followed the reporters' discussion of France's potential to shutter mosques "that have radical leadership."

Well, I would hate to do it, but it's something that you're gonna have to strongly consider because some of the ideas and some of the hatred is coming from these areas.

Though Trump admitted that only an extremely small percentage of Muslims are radicalized, he called for greater surveillance of mosques in New York City. "Well, you're going to have to watch and study the mosques, because a lot of talk is going on at the mosques," he said. Asked if he worried about backlash against Muslims, he said that the hatred is already "embedded" in the Muslim community but acknowledged the danger of vilifying an entire religion. "I know some many people — Muslims — who are such unbelievably great people, and they're being so badly tarnished by what's happening now," he said. "It's a shame."

Trump's expression of aggression seems to counter the positions of the two most recent presidential administrations. During his time in office, President George W. Bush frequently sought to work against Islamophobia. When meeting with U.N. Secretary General Kofi Annan in November 2002, Bush told reporters,

Islam, as practiced by the vast majority of people, is a peaceful religion, a religion that respects others. Ours is a country based upon tolerance and we welcome people of all faiths in America.

Today, President Obama reaffirmed his commitment to religious liberty during a press conference at the G-20 summit. Though he encouraged leaders in the Muslim community to work actively against seeding hateful ideology, he also urged Americans to embrace values of inclusion. CBS News reports that Obama expressed support for Bush's position, saying, "I was very proud after 9/11 when he was adamant and clear about the fact that this is not a war on Islam."

As for Trump's comments today, though, the Twitterverse had plenty to say about them:

But at least one person I could find on Twitter agreed with him:

Yet as countries around the world rally to fight the spread of terrorism, President Obama has reasserted the importance of protecting refugees and retaining a spirit of inclusivity. More from his press conference at the G-20 Summit this morning:

And so we have to, each of us, do our part. And the United States has to step up and do its part. And when I hear folks say that, well, maybe we should just admit the Christians but not the Muslims; when I hear political leaders suggesting that there would be a religious test for which a person who’s fleeing from a war-torn country is admitted, when some of those folks themselves come from families who benefitted from protection when they were fleeing political persecution — that’s shameful. That’s not American. That’s not who we are. We don’t have religious tests to our compassion.

The response to the Paris attacks illustrates perfectly how fear can threaten tolerance. Especially now, it's reassuring to hear that President Obama's administration is actively working to ensure that the U.S. continues to protect and cherish diversity, while doing everything possible to keep Americans safe at home and abroad.