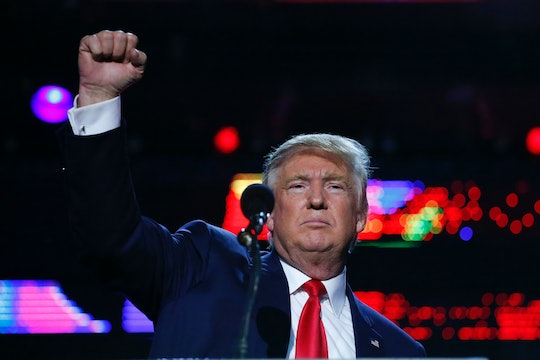 One of the highlights of the 2016 presidential election has been Saturday Night Live's interpretation of it. The sketch comedy show has consistently been putting out terrific parodies of presidential nominees Donald Trump and Hillary Clinton — often echoing the public's perceptions of both candidates. But one candidate isn't happy. In a tweet over the weekend, Trump said Saturday Night Live is rigged against him — and it seems someone forgot to tell him that SNL is not a media outlet. Sorry, Donald.

For the past three weeks, SNL has had a lot of political ground to cover. There have been debates and scandals — all of which has been perfectly parodied by the show. Clinton, played by Kate McKinnon is acted as a robotic and over-prepared nominee, willing to do whatever it takes to make people like her. Trump, played by Alec Baldwin, is acted as egotistical and out of touch. Neither parody is flattering by any means, but both are equally funny.

However, it seems Trump failed to see the humor in Baldwin's hilarious impression on Saturday, which he referred to as a "hit job" in a Sunday morning tweet. Trump also called the show "unfunny." However, Trump failed to recognize quite a few things: that he has been a fan of the show in the past and that a sketch comedy show can't really "rig" an election.

Trump's past relationship with SNL is, to use Trump's words — huuuuuge. Trump first hosted the show in 2004 when his reality show The Apprentice was the "number one show" in America. Trump later hosted SNL again in November 2015. During both times, Trump appeared alongside the actors who parodied him during his opening monologue and seemed comfortable enough with their portrayals. And the Trump parodies aren't recent — SNL has been portraying Trump in sketches from as early as the 1980's.

But this time, it's all politics — literally. As The Washington Post pointed out, it is not clear why Trump is just now tweeting about SNL, when the themes in last night's cold opening were echoed in the last two episodes. However, something about the portrayal must have gotten him mad. It could be because Trump has recently been increasingly talking about this election being "rigged" by the media — and he's been touting the myth that "the media" is in favor of Clinton now more than ever before. It makes sense, then, that a parody of him would strike him as not funny, but rather a personal attack, adding to his belief that SNL is biased towards Clinton.

Baldwin's portrayal — along with the actors who portrayed Trump before him on SNL — is and always will be funny. Trump's comments then, come off as a little outlandish at best, and childish at worst. As long as there are politicians and there is television, SNL will be there to make fun of them. One would have hoped The Donald, with all his experience, would have learned that by now.