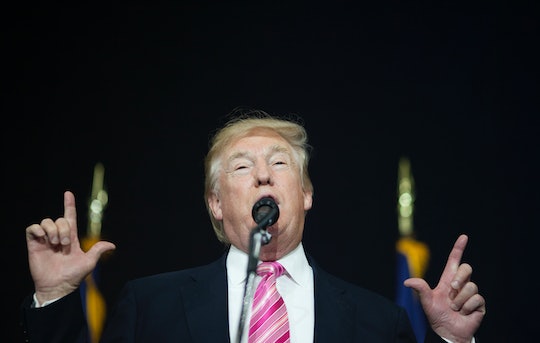 Donald Trump, a man who received four draft deferrments, and ultimately a medical disqualification from going to the Vietman war, just stood in front of the room full of veterans gathered at the Retired American Warriors Pac. and suggested that soldiers suffering from PTSD are weak. Donald Trump said soldiers suffering from PTSD aren't "strong," and it's a dangerous and reckless thing to say, particularly coming from someone who wants to be Commander-In-Chief of our Armed Forces.

Trump was speaking to the veterans group about issues including the suicide epidemic among veterans, and dissatisfaction with VA services, according to BuzzFeed. Trump first acknowledged the more than 20 suicides a day within America's veteran community, but then added, "When people come back from war and combat and they see maybe what the people in this room have seen many times over, and you’re strong and you can handle it, but a lot of people can’t handle it,” Trump said.

Can't handle it? The BuzzFeed reporter in the room said the statement was met with mostly silence by the crowd. Trump's campaign did not respond to Romper's request for comment regarding what he thinks of those suffering from mental illness.

It was yet another completely tone deaf and offensive comment from Trump on the campaign trail. And much like his attacks of the Gold Star Khan family following the Democratic National Convention, this latest insult against veterans is likely to offend voters on all sides of the political spectrum. Here's just one tweet that followed Trump's comments:

Trump's comments about Khizr and Ghazala Khan, whose son was killed protecting his fellow soldiers abroad, had a big impact on his poll numbers. Seventy-three percent of voters said they disapproved of his attacks, including 59 percent of Republicans, according to TIME.

Why are voters so offended by insults to our veterans? Because they know what Trump doesn't. Americans know how many of our veterans are returning from combat with debilitating PTSD symptoms: 1 in 5, specifically, according to George Washington University. American voters know that about 20 veterans per day commit suicide, according to the Veterans Administration.

Besides needing services, our veterans are constantly battling the stigma, which Trump is blithely peddling, that needing help to get over combat stress makes you weak. In fact, the Wounded Warrior Project, a non-profit dedicated to helping vets after they return home, is trying to push back against that old stereotype with messages like "Asking for help is strength not weakness," and attempts to encourage more veterans to get the services they need to get back to their lives.

The Wounded Warrior project estimates there are up to 400,000 grappling with combat stress, depression, and other "wounds of war." Is Trump really trying to suggest they just "couldn't take it?"