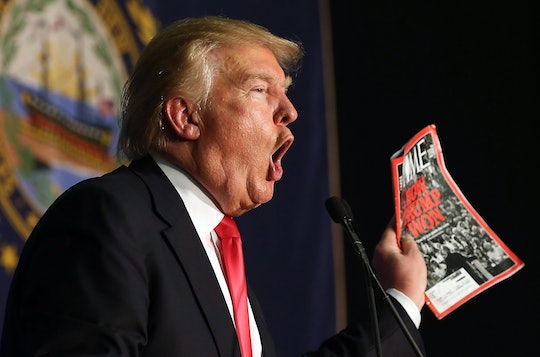 Remember the time Donald Trump lost the Iowa caucuses and people actually thought he would be gracious and accept defeat? Well that fantasy didn’t last long, because Trump tweeted on Wednesday that Texas Sen. Ted Cruz “stole” Iowa. And though The Donald must have had a moment of clarity and deleted the tweet, he returned to true form and unleashed a series of tweets that insinuated exactly what he said in the original tweet.

“Ted Cruz didn't win Iowa, he illegally stole it. That is why all of the polls were so wrong any why he got more votes than anticipated. Bad!" the now-deleted tweet read, according to Politico. But despite his harsh comments, minutes later a revised, more “nuanced” tweet appeared on his timeline. Actually, the post was worded the same, but didn’t include the word “illegally."

TIME reported that Cruz won Iowa because of top-notch organizing and fundraising, earning 28 percent of the vote. Though Trump narrowly lost with 24 percent, it didn’t stop him from taking to Twitter to throw jabs left and right. Following up, he attempted to explain just how Cruz “stole” Iowa: by releasing a statement that Ben Carson was dropping out of the race.

OK, so there is a ring of truth in all of this. According to CNN, the Cruz campaign did tell people Carson was dropping out, so Carson supporters should then support Cruz. The Cruz campaign allegedly based the rumor about Carson dropping out on a tweet from CNN’s Ben Moody that Carson was heading to Florida and not New Hampshire after the Iowa caucus. Cruz officials took this to mean Carson was suspending his campaign, and Iowa Cruz staffer Spence Rogers sent the following email to precinct staffers, according to CNN:

Breaking News. The press is reporting that Dr. Ben Carson is taking time off from the campaign trail after Iowa and making a big announcement next week. Please inform any Carson caucus goers of this news and urge them to caucus for Ted Cruz.

However, that wasn’t completely the case. While Carson was making a detour to the Sunshine State, it was because he needed to "get a fresh set of clothes," his campaign later said. The mix up wasn’t taken lightly. Carson called for the Cruz staffer to be fired and held responsible for the press release. And on Tuesday, the Cruz camp apologized to the retired neurosurgeon in the following statement, according to CNN:

Last night when our political team saw the CNN post saying that Dr. Carson was not carrying on to New Hampshire and South Carolina, our campaign updated grassroots leaders just as we would with any breaking news story. That's fair game. What the team then should have done was send around the follow-up statement from the Carson campaign clarifying that he was indeed staying in the race when that came out.

The issue appeared resolved until Trump tweeted that the Iowa caucuses were rigged. So, what’s his solution? The results either need to be “nullified” or the caucus needs to be redone altogether. He explained in this series of tweets:

Cruz has succeeded in capturing evangelicals across the country, and that was reflected in Iowa results. Unfortunately, the religious right isn't a group that Trump has won over as much.

“My approach to Donald Trump is the same as it was before, in that I will not engage in insults. I will not engage in personal attacks,” Mr. Cruz told reporters in late January, according to The New York Times. “Donald has changed how he has approached me. He is now insulting me every day. He can do that. That’s his prerogative.” These insults have been hurled for some time now, albeit Cruz’s are mainly limited to scrutiny of Trump’s “far-left” positions. Starting with Trump saying that Canadian-born Cruz is ineligible for the presidency, Trump has pulled out all the stops to delegitimize Cruz's campaign.

But would you expect anything less from him?