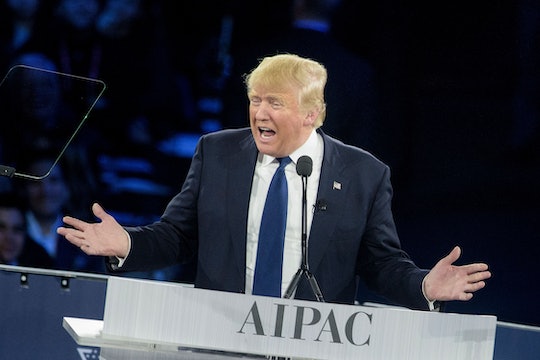 Earlier today, Republican presidential front-runner Donald Trump was asked his thoughts about the Brussels attacks on Fox and Friends, the TODAY Show, Good Morning America, and Mornings with Maria Bartiromo (to name a few). And Trump, in traditional Trump fashion, responded arrogantly and flippantly. According to Trump, the Brussels attacks are "just the beginning" of a presumed series of attacks because, well, Brussels let the wrong people into their country. According to Trump, all Muslims pose some kind of danger to the country, so he called for "surveillance of Muslims" in America. And, according to Trump, the U.S. (as a country — and all countries) are just asking to be attacked: because the U.S. has open borders and because it doesn't torture its prisoners.

Trump went on to say that this is the reason he holds such a strong stance on border control, adding "I guess it’s at least a small part of the reason why I’m the No. 1 front-runner," according to Politico. But, let's take politics out of the equation for minute. Let's look at these words, and Trump's reaction, for what it is: ungrounded fear-mongering.

Trump's remarks — and remarks like this — are not OK. They are unsubstantial, they are hateful, and they are not OK.

"Brussels was a beautiful city."

I've never been to Belgium or Brussels, but from what I know, Trump is right: "Brussels was a beautiful city." However, what Trump got wrong is the use of the word "was." A country doesn't become ugly or hideous because of a terrorist attack — look at Paris or Boston or New York, New York. Sure, these cities changed — their landscapes changed, their skylines changed, their hearts remain forever changed — but in the aftermath, people came together. People supported one another, and these cities became more beautiful because of compassion, comradery, and because of love.

Brussels was "a beautiful place with zero crime."

While this sentiment is touching, it is entirely untrue. In fact, according to Numbeo.com, the crime rate in Brussels is moderate. And while Dirk Jacobs, sociology professor at Brussels Free University, did point out in a 2010 interview with Time that "Brussels is not Durban, Mexico City or even Chicago," he noted "the city — and the country at large — is confronted with unprecedented social problems, and policymakers seem to be spending their energy on other topics."

Much to my surprise, there are segments of this statement I agree with. I agree the U.S. (as a country) needs to be "careful" and I agree that it needs to be "vigilant," but erecting walls and shutting our borders isn't vigilance, it is avoidance. It is completely, and totally, unrealistic — as is his plan to make Mexico pay for said wall, according to CNBC. Or, as Trump said in October 2015:

And it is ignorant. Plain and simple.

However, perhaps the biggest problem isn't what Trump has said, but what he hasn't. In all of Trump's interviews — in all of his comments and Tweets and remarks — Trump hasn't spoken about victims. Trump hasn't expressed sympathy or empathy. Instead, he has used the attacks as political fodder — as proof he was "right."

But he wasn't "right" about anything. Yes, terrorism is a threat. But blaming an entire religion for terrorism isn't a platform (or it's not a good one). People's lives aren't platforms, and Trump seems to have forgotten that.