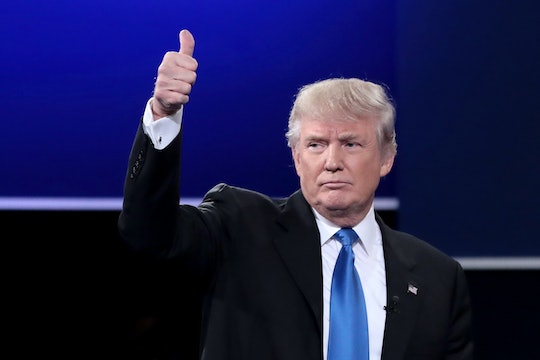 So the first presidential debate is over, and you may be wondering about the outcome. Who was more presidential? Who was more prepared? Who was the winner? The first debate was full of criticisms; some critiques come from viewers, some from media, and some from... well, the candidates. But, one criticism that Donald Trump is facing after the first debate is actually something former Secretary of State Hillary Clinton is quite familiar with. The internet, collectively, is rooting for Donald Trump to smile more.

The comment itself is nothing new for this particular election, though it is very rarely aimed at Trump. Clinton has become a constant target for those saying she doesn't smile enough. Unfortunately, Clinton leads leagues of women who have received the "suggestion" from men for years. The insistence that women smile has become a consistent media callout, since, news flash, telling a woman what to do with her body — in any way — is not cool. And if she doesn't want to smile, then she should very well keep that smile off of her face. No matter who questions why she isn't grinning ear to ear at every moment of the day.

One person who made headlines for his own comment on Clinton's lack grin was Reince Priebus, the chairperson for the Republican National Committee. In early September, Priebus shared a tweet noting that Clinton didn't smile during an appearance. He also lumped the "note" in with a words like "angry" and "defensive."

Of course, I wonder if Priebus would have found Clinton less "angry" and "defensive" if she had been smiling. Since the double standard is in place, men are rarely noted as not smiling... that is until now.

After the first presidential debate, Trump found himself on the sweet side of irony — at least that's how any woman who has been told to smile will probably see it. Unlike Clinton, who was actually smiling a lot throughout the debate (and how could you not, some moments were actually laughable), Trump wasn't as toothy. Luckily, Twitter wants to aid in his apparent despair, and offered up these tweets in hopes that he'll smile again one day.

While most of these are said in jest — because again, double standard — may this be a reminder that we should not be telling anyone to smile, particularly women, who receive it the most. Women do not owe anyone anything, including a smile, smirk, or grin. And the tweets above prove that the double standard needs to end.