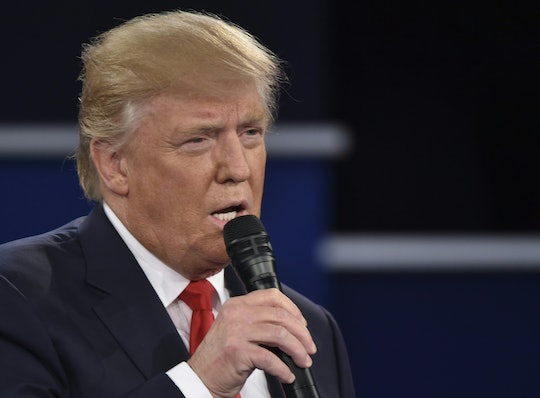 During the second presidential debate, Donald Trump seemed to be in desperate need of a tissue — and people at home noticed. Although viewers couldn't help pass him a Kleenex, they did come through with some classic Donald Trump sniffling memes and tweets.

This isn't the first time all eyes have been on Trump's nose during such a public moment: During the first presidential debate, Trump was sniffling just as much. That led to such hashtags as #sniffles and #trumpsniff trending on Twitter. And, unfortunately for him, it seems Trump's dedicated doctor wasn't able to come up with a cure in time for the second debate.

The irony of Trump glazing over his sniffle is that his campaign made a big point about Hillary Clinton's supposedly failing health when she had a cough. (Although, that did turn out to be a bigger issue for Clinton.) Meanwhile, Trump, who is older than Clinton, said he is the candidate with the "stamina" for the rigors of the presidency. Earlier in the campaign, Trump also offered a statement from his doctor, who claimed Trump would be the "healthiest individual ever elected to the presidency."

So then what's up with those sniffles, Trump? Huh?

Following Trump's sniffling at the first debate, there were some interesting theories about what may have been the cause. As James Hamblin lightheartedly wrote for The Atlantic that Trump's sniffles may not be due to allergies:

Cocaine would also give someone a grand sense of self. It would give someone sexual potency, which Trump has assured us he has. It would give a 70-year-old man boundless energy and the confidence that he could fulfill the duties of the highest office in the land despite having no experience in any public office.

Trump did not respond to that theory. Other, more plausible explanations for Trump's sniffles include a little cold — or just a habit. As Jonathan Tilove said for the Statesman:

I had heard Trump’s audible breathing before. It was a feature of his public speeches. I didn’t hear it all the time, and I thought maybe it was only a periodic habit, maybe when, after a few smaller breaths, he would take a bigger breath to deliver an important line.

Really, whether it's a mild cough or sniffles, there are much bigger issues of concern when looking at the candidates for president. And, anyway, it is flu season. Can someone just please get the guy a tissue?